Easter and the Evil Geniuses

In an effort to introduce the Evil Geniuses to the concept of “I Quit Sugar” (AKA I Quit Fun, and pretty much life as we know it) we decided to change the rabbit habits and set them a task this Easter.   Make the little buggers work for their eggs.  So we procured some of those tiny, barely-a-mouthful eggs, as well as a vast array of ‘gifts’ for them to hunt down.  I call them ‘gifts’, for as Liam said half-way through the task, “The Easter Bunny is waaay more practical than Santa- he keeps giving us stuff we need, like Winter PJs and new lunch-boxes”.

And that, my friends is where you give yourself a little mental high-five, and recall the time they nearly sent you mad, whining and crying because the 110m walk home from the beach was “killing” their precious feet and grinding them into stumps.  Or something.

12.17am: The Bunny was drinking a few too many Little Creatures pale and refreshing ales and trying to make up riddles

12.52am: The Bunny had sorted and laid out the clues and surprises.  The Bunny was a bit ‘tired’ at this point.

4.50am: Unit One woke up and had to be sent back to bed (I lied, and said I had seen the Bunny lurking around, but he got scared away by their noise.  Unit One cried.  Unit Two heard the ruckus and cried too)

5.10am:  Both Units awoke properly and came upstairs.  There was a vague light, so no hiding the fact that the Bunny had been, and frankly I could see where this was heading… Sweet Baby Cheeses, is there no redemption to be had? 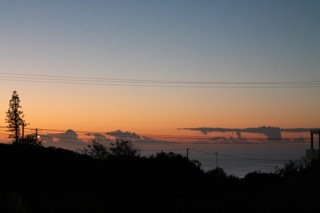 No, the Sunrise at Sunrise Beach did not compensate

And so on it went.  Eighteen clues, eighteen weird little presents with the odd tiny egg.  It took quite a while, which was good as I needed my Easter coffee after less than four hours sleep.  I’m not the Bunny I once was. 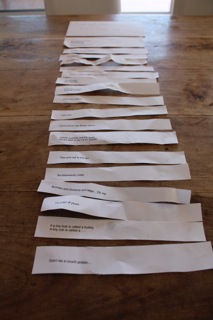 The clues. Some leave a little to be desired, but hey, there were Little Creatures to be consumed

The highlight for me, was this clue (which I quite liked):

It took them about five seconds to figure out it was “ice’ and go look in the freezer.

You maybe Evil you two, you may have deprived me of sleep and chocolate and sanity, but you are MY kinda geniuses.

Hope you had a happy Easter.  What is your Easter tradition?