I had a funny blog (hilarious even) all mapped out in my mind to pop up here, but I’ve just watched Q and A, and now it all seems a bit frivolous.

Did you watch it?  I usually can’t stand it, mostly because of Tony Jones and the fact that my Twitter blows up with all the #qanda tweets and I’m too lazy to mute them.  But also because of all the grand-standing and posturing, that I can’t help but think is all for show, and that they might all go out for a beer together afterwards.

But tonight was different.

There was a reflective reverence to the panel.  The answers were thoughtful.  The interactions respectful.  No yelling.  No name-calling.  Perhaps it’s because the panelists weren’t as polarised by politics as they usually are, or maybe it’s because regardless of the methodology in which each one believes change can best be implemented, there was a commonality of intention.  A bigger picture that each one, in their own way, would like to work towards.

And there was a warmth.

As it ever is: treaty is one of the goals, as is creating the best outcomes for families- children in particular, as well as encouraging bilingual-ness (I’m not sure what the correct term would be).  These issues were only just touched on and then moved along.  There was much to discuss and very little time.  Not enough for any actual deepening of understanding.

I’m sure there will be tirades on blogs tomorrow, for example: the maligned Noel Pearson will be praised from one side for being eloquent and sensible and caring for the rights of children, and criticised from the other for being simplistic with an ‘either/or’ policy and of course for being Toned Abs’ right hand man.

And so it goes.

For if you care enough about an issue to go on National television and state your opinions outright, and are then following up those ideas with your life’s work, you will expect that someone, somewhere to have an opinion that is both equal and opposite.  And they will voice it.  Most likely without you being in front of them, to have the right of reply.

I can’t help but think: why are there still sides?

I have no idea what the best course of action is for Australia as a nation right now.  This big warm-hearted country steeped in guilt and shame, and yet still unable to back down and apologise, and make change on a meaningful level- and not just with a few words of acknowledgement before a seminar, about the traditional custodians of the land- but with real action.  I don’t pretend to know what the next step is, nor do I think I’m alone.  Even the people intimately involved in putting forward suggestions seem to be lost on where to go.

So instead, we sit on our hands, or throw them in the air, afraid to weigh in, lest we say/think/do the wrong thing.  Offend someone.  Over-simplify.  Make the wrong choice.  Be seen as too white or too brown.  Yet we know, that every single time we don’t make a choice, we are making a choice.  Not choosing is still choosing.

And still we wait.

And yet again, the little children are taken away.

A little dude from Japan has come to stay at The Asher’s for a couple of weeks.  I call him Watters.  He looks at me blankly when I do, even though I have explained that Aussiefying is name is imperative.

He has a little English at his disposal, and we have virtually no Japanese, despite the Evils (they shall no longer be called Geniuses) attending classes in it for five and three years respectively.  My Mum gave us a translation book, which has been both useful and a source of great mirth, as he pisses himself every time we speak Japanese to him.  Personally, I’m a little affronted, as I’m pretty sure my pronunciation is excellent.

I have reverted to doing what I find most useful when someone doesn’t understand me: talk loudly, so they can now not-understand me with sore ears.  As an added bonus, I also use sign-language.  My grandparents were deaf, so in my family that’s what you did if words didn’t suffice: Auslan.  So, yeah, I was signing my little fingers to the bone for Watters, until Liam said, “He’s Japanese Mum, not deaf.”

We were also using a translator App on our devices, but have given that the flick since I used it today to ask him, “If there’s anything else he wants to do in Noosa?” and he nearly wee-d in his Abercrombie and Finch designer jeans.  I suspect I may have asked him something to do with my substantial mammary glands or Nathan’s gastrointestinal ablutions.  He wouldn’t say.  But every time he looked at me for the rest of dinner, he giggled.

He has a great laugh, our little Jappy Chappy, so we try to do things to make him giggle.

So far we have made him laugh at: urinals in male toilets, sparklers, meat pies, toasted marshmellows, a heat bag in the bed at night, kangaroo spit and koala poo, gravy, peas, Coco’s violin playing, five minute showers, the spa at a local resort, warm Nutella on ice-cream, Vegemite, weird rocks on the first Groyne, pelicans, driving a boat, Cheezels on fingers, ‘cranky’ tacos, blue-tounged lizards, our kids not eating their dinner, bacon and eggs cooked on the barbie, Woofa the shitcat, our footy team’s score today (we were NOT laughing), Nath’s singing, various Aussie stuff in shops, Liam’s speedos, pretty much everything at Aussie Zoo and my use of chopsticks.

However, the thing that has made him laugh the most is my dancing.  Again, I’m shocked.  Because I’m pretty sure that my dancing is tres fantastique (I may not have any Japanese, but by gawdy I know me French).

Last night we got out the “deck” which is a pumpin’ little speaker with a DJ function.  We logged in our iPods and went to battle.  Watters has a penchant for songs that are newer and boppier than a woman of my maturity can safely boogie to, and still keep the contents of her bladder retained, but after an aural arm-wrestle over “Blurred Lines” (Him: Yes, Me: Hell NO) we found common ground with Michael Jackson.  Turns out this stylish, crazy, funny little dude from Tokyo knows the words to Thriller- including the Vincent Price bit- almost as well as me (not bad considering it takes fifteen minutes to find out where he went on his last holiday), but, even better, he knows the dance at least as well as The Wacko himself.

So Watters laid out the moves, and The Ashers followed along as best we could.

And his gutsy laughter rang out across our blue, blue seas. 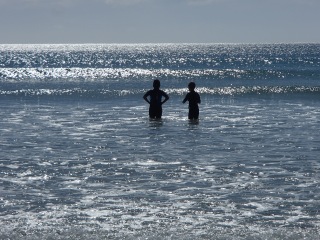