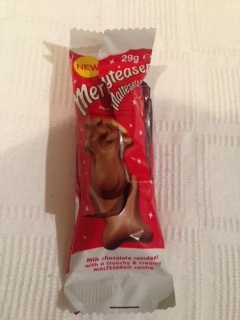 Here are the hits:

1. This little beauty. I’m doing these for All Hallows this year, instead of those thirty-five buck carving pumpkins the supermarkets are trying to sell me. And they come with the added bonus of providing ingredients for all the Pina Coladas I shall be making to survive the trick or treating. (I’m only doing it to get rid of the fruit you know)  Anyway, with pineapple and coconut, a Pina is practically a health drink! 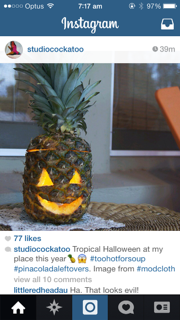 Sorry. I ripped it open before photographing.
What happened to ‘Tweet it before you eat it’?

I know it’s October, and I know I shouldn’t encourage the Mulit-National Money Sucking Machines by buying seasonal promotional items when the season is nowhere to be seen, but they are only ONE DOLLAR. And they say “Merryteaser” on them (what does that even mean?). Nobody knows, but how can I refuse when they beckon me from the counter with their cheery red packaging and their enticing and cooling snow graphics? And when they are only ONE DOLLAR? So, in a moment of weakness I purchased two, one for me and one for the love of my life. I popped them high up in the fridge, away from prying little eyes ‘for later’. Well, later was much, much later, say around 11pm when Nath had fallen to slumber, and I snuck out to the kitchen and ate mine. And then Nath’s. Sorry Nath.

But never fear, a patient gave the “kids” a giant chocolate Freddo each today. I’ve hidden them in the fridge. For the “kids”. Of course.

3. The Spring Spectacular at school tonight. I managed to sit through it all, even though there were TWO count them TWO renditions of ‘Let It Go’, and not a one Monkey Wrench cover. And my ears aren’t even bleeding. For serious. 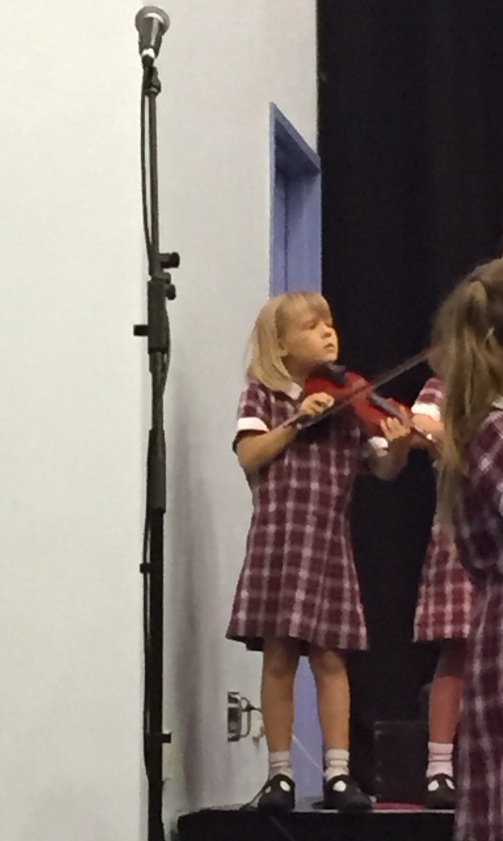 As you can tell, Coco is a very talented musician.
Liam was also there, clarinetting along, but we didn’t get a pic that didn’t feature other kids.
So just imagine you can see him too. For balance, like.

4.  Did  you see Harry Potter on Jimmy Fallon? I’m not sure if I like Daniel rapping, or Jimmy grooving along and trying to keep up, the best. Something about that man just makes me laugh (Jimmy, not Daniel). Check it out, and watch it through to the end. It’s fun. I shared on FB my version of ‘The Black Widow’ for Edenland’s lip sync competition, but I’m thinking I might have to pop the real thing up here. Or maybe “Ice, Ice Baby”. Nath does a killer version of “Bust a Move”, so the possibilities are very exciting.

5.  Getting some of your feedback on the blog this week. I love your comments, shares and retweets. You might not realise it, but when I’m sitting here, being the little keyboard warrior, it’s hard to imagine that anyone else even reads this drivel.

I can, of course look up Google analytics and see how many of you play along, but it’s much nicer to actually get some feedback. So thanks to all of you who do comment, and then share the love around. It makes a difference to me.

I’ve got a few little writing plans for next year (see, I am following Matthew’s rules from the book I mentioned this week, and telling you about some of my goals) and this blog was created to see if anyone would like to read my stuff. It seems some of you do, and that, quite frankly, is BLOODY AWESOME. Writing stuff has always been a little secret and fragile thing that I’ve held in my heart, too frightened to let it see the light of day, lest it wither and turn to so much dust. Giving it some air, here on my little space on the internet has been both confronting and freeing in equal measure.

So thanks you lot. You make an old bird’s heart zing.

So how was your week? What were your hits?

Did you have any big wins? 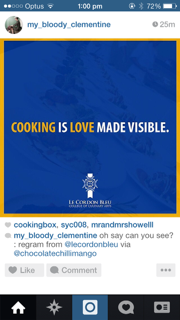 When I was a kid, dinner was served up at the table at 6pm. Mum would set the table herself (after asking us seventeen billion times to do it for her), every night. We always had a table cloth, correct cutlery and crockery and glasses of milk. The milk was her downfall of course, because we would fill up on that before even starting. It’s amazing how easily the lactation of cows, made for their calves, can sustain the stomachs of human children.

My brothers and I would sit at the table, and it was as if some silent starter yelled, “LET THE GAMES BEGIN!” For that is what befell my mother for the next two hours. Every.single.night. And they weren’t fun games.

I look back, and I wonder how she did it. A single Mum, on meagre wages, working all day, then coming home to prepare something nourishing for her children, who never, ever ate it. Or even attempted most of it. The rule in our house was that we had to eat everything on our plates. I suspect that ‘the rule’ was never adhered to. Not even once. Every night we were bribed, threatened and cajoled. It almost always ended in tears, and that was just Mum.

Skip forward a score and ten, to where I am the person in the Mother Seat. Where I am the person thinking of the food, shopping for the food and cooking the food. So much carry on about food. Only to have the cherubim screw up their cute little faces and say, “I don’t like that.”

And they don’t have the tools at their disposal that we did. We had a pet Labrador (they eat anything, yes, even Corned Beef with white sauce), we had overalls from Just Jeans (so many pockets) and we had milk (did you know you can hide one stalk of broccoli and nine peas in every glass?). The only thing they have at their disposal is whinging. And they use it well.

When they were little, I tried and tried to think of delicious and healthy things the children would like to eat for dinner. I stopped short of making food art, but I did attempt to make their plates contain ‘the colours of the rainbow’ every night. It made no difference. They still hated it.

So these days I have taken to simply pleasing myself and drinking wine. In fact, I delight in lovingly placing their plates in front of them, and hearing them say how much the despise the menu plan of the day. I see their displeasure as a personal success. So you can imagine how I laughed when I saw this on my instagram today:

Sorry family. If this is true, then my love for you is a bit shit.

Are your kids good eaters? What are your failsafe recipes?