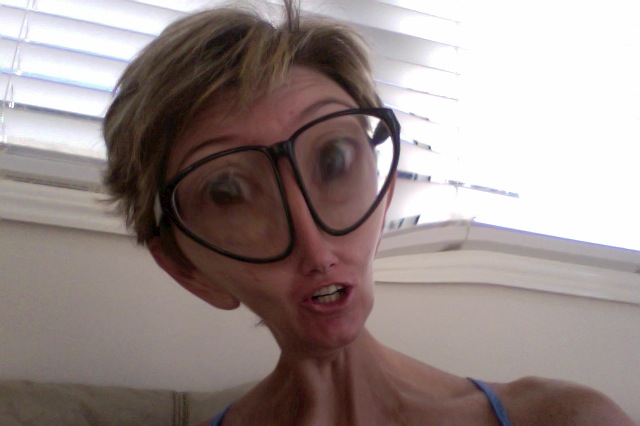 My Mother is an Alien

Here’s a fun thing to try with your kids:

I was saying goodnight to the Evil Genius Mark I, and the light must have been casting a strange glow on the side of my face. He started to giggle. “Your face looks really weird, Mum,” he said, a comment I did not take kindly to, “you look like this,” as he proceeded to pull a really ugly face.

Quick as lightening, I replied, “Oh no! You’ve seen me without my mask. You see, I’m not really your mother, I’m an alien. I killed her a while back, and now I’m here impersonating her, and gathering information about you Humans. I take my mask off every night when you all go to bed (it gets a bit itchy). It must have slipped a bit. Here, I’ll fix it.” I put my face in my hands an mooshed my features around a bit, then turned to face him in the full light. “See? fixed.”

His brown eyes were as big and wide as a saucepan of melted chocolate, and for a moment there was a wisp of something- fear, or maybe understanding of all the times when he thinks I’m a little off- and then he realised how ridiculous that was, and laughed.

At that moment Evil Genius Mark II walked in, and asked what we were talking about. I told her to pop into bed, and I’d be in a moment to share my darkest secret. She was away in a flash, gleefully tucked up, waiting for the dirt. There’s nothing that kid likes more than being in the know.

I was enjoying my story so much, that I added some embellishments. I made her swear, that if I shared this momentous secret she could not to tell another living soul. I told her of how I had been accidentally discovered, but now that her brother (if, in fact he WAS her brother) knew, then it was only fair that she be included.

I told my story and I told it well, giving a brief history of my alien self, and how I had killed The Mother Figure so I could live amongst the Humans undetected. And then, I revealed my hideously contorted countenance.

She screamed, and  buried her head in her pillow.

I laughed as I had with Mark I, happy that she was playing along so well with the gig.

We are a family of imaginators and story tellers, we tell silly and scary stories all the time, often with the benefit of mood lighting (a torch under the chin), so I was pleased that she knew the correct fake fear to exhibit.

Proper, starting from your soles, and grabbing a piece of your heart on the way up, full body sobs.

“Coco, Coco, it’s just a joke honey, a funny story because Liam said my face was weird. It’s not real. I’m not an alien.”

She stopped sobbing long enough to gasp out, between hitching breaths, “But you’re so UGLY. I want my Mummy back. I don’t want a ‘poster.”

“That’s exactly what a ‘poster would say!”

I allowed that this was true. So I told her to lay down and face me (careful to keep my prettiest countenance) whilst I told her three things that only her Real Mother would know about her.

This calmed her enough to stop sobbing and start to drift off to sleep. “Mummy, she murmured,” half in this world and half in the world behind the veil of sleep, “can you tickle my legs?” This was her soothing thing, (the thing she cons Nath into doing most nights), gently tickling the dry and irritated skin behind her knees where the eczema is worst. A thing that for some reason, I just can’t stand doing.

My hand went to her popliteal fossa, as if to lightly flutter over the angry skin, and help my little girl safely meander her way into the world of dreams, then a thought flashed into my head: she called me UGLY.

Teach that kid to call ME ugly.

Do you ever play tricks on your kids?

Do you wish you were an alien here some days, just collating information on the Humans, soon to return to your home planet Zoybidor (Okay, I think I’m liking this story a little too much now) ?