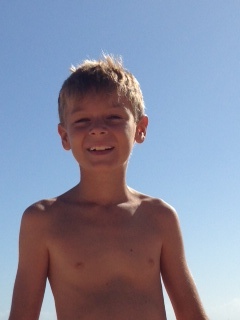 How did he get so big?

Wasn’t it only seven months ago last Tuesday when I chucked that pregnancy test on the ground and went running along the beach trying to get some air back into my lungs once I realised my life was about to be changed forever, and I could not control how?

Wasn’t it only five months ago tomorrow that I held him in my arms, whilst chatting to the Ob/Gyn at my six week check up, looking down into those big chocolate eyes and saying, “I really like him. I mean, I love him, but I really like him.”  With a feeling of surprise of how much I genuinely liked the little guy’s company?

Wasn’t it only a few weeks ago that we were going through the kindy gate and he stopped, and stared at a sign, and chimed in his sweet little four year old voice “What does ‘Trespassers will be prosecuted’ mean Mummy?”  And I nearly fell over, not realising he could read already?

Wasn’t it only a couple of days ago that he told me he wanted to do some busking to raise money for the World Eyes (World Vision) and then decided also to have a big garage sale of “all the toys that I’ve already had a lot of fun with, and even though I still like them, I’m kinda more of a Minecraft and Author kind of guy, so yeah, maybe I could sell them to other kids so that the World Eye kids could get some, you know, food and water and stuff.”?

I think it was.

And now, as you read this he will be taking the bag that he has packed himself, on a two night camp up to the hills to have adventures and make memories that are nothing to do with me.  He will eat, sleep, drink and play whatever he chooses without me overseeing every little detail.  He will have conversations with friends, laugh with teachers and test his limits in new and exciting ways and I won’t have anything to do with how he goes about it.  He will do it however he likes.

He will be his own man.

Already he knows all about how babies are made (or as he would say, “How to conceive a child”) but he hasn’t quite grown into his teeth.

So how did he get so big?