Today I was reminded of why I love the interwebs…

I remember about two years ago Melbourne experienced a “devastating” earthquake.  Remember it?  We were sitting on our couch in Southeast Queensland, and before any of the old school media could inform us, Twitter had told us there had been a ‘quake.  Just moments after it happened, and even before the last aftershocks had settled, this is how we discovered the horror that had befallen The Garden State: 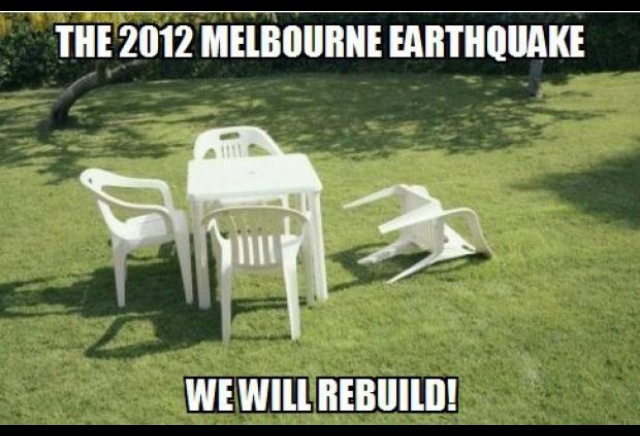 We pissed ourselves whilst ringing our friends and family to see if their Jenga games had emerged unscathed.  The funny part for me, was not so much how pisspoor the ‘quake actually was, but the fast response of regular punters sitting at home with their meme makers.

Nathan, for some reason, was looking at Vintage Wooden Boats on eBay (at least that’s what he said he searched up), and was admiring the clean lines, and warm tones of some such vessel when he came to what shall henceforth be known as the infamous Image 9.  Please scroll through the images HERE.  It’s worth your effort, I promise.  Again, we sat on our couch and pissed ourselves at the funny things that people do.

So of course I posted the cover pic on Facey and Twit, and then continued for the next  hour or so to snicker at the juvenile double-entendre flowing in from real-life and twitter friends.  Jokes about being water-tight, and seaworthy, about wood and deep hulls and other such nonsense.  I emailed the seller, telling him how much I liked his Image 9.  I was half expecting a ‘whoops’ and for him to take the pic down, but instead he sent me ‘  …Not even the whole semicolon/half-bracket thingy that people use to denote a wink- just the sleazy winky-eye.

We pissed ourselves again.  IDK why, it’s just funnier that way.  With just the winky-eye.

And that, my friends, is why I love the internet so*.  Not for live-streaming and wifi and research and Dr.Google and time-saving and all the rest.  But for funny shit like this.  I know today there was yet another shooting tragedy in The States.  I know today somebody got bombed, somebody died in a car-crash and somebody else went bankrupt.  I know some politicians lied and some children fought each other in cages. You can find that all out too, if you want to.  But somewhere in Nerang, some dude, sitting in front of his computer, uploaded all the best pics of his boat, for us to bid on, and thought he’d add one last surprise for all the other boat-nerds who happen upon his listing.  It kinda gives me hope.

So are you gonna make a bid?  She seems fairly cheap.

*Well that, and funny cat videos, but that goes without saying.