On the train from the airport to the city, there seemed to be a lot of young children in formal school uniforms, for a Sunday.  Whole families were decked out: children in blazers, hats and ties, adults in what we would wear to a wedding up here on the Queensland Coast.  I guess you would call it semi-formal.  With lots of black.  More black than you ever see in my town.  I thought it a little unusual, but then I’m from UpNorth, and you never know what those crazy Southerners will get up to.

We all got off at the same station, landing us in the middle of the city.  The mood was solemn, but then, it was the city, and we don’t really expect country kindness this far south of our border.  We stepped out of the station, and into a horde of people.  At first I thought it was the crush of the usual Sunday crowd, and bewildered with the motion that swept us along, it took me a moment to realise we had waded into some kind of rally.

The assembled were orderly, and the pace as slow as a funeral march.  Almost as I formed that thought, I heard someone ringing a bell.  Not a festive tinkling.  A knell.  Followed by some kind of chanting.  And it was then that I realised we were in some kind of cortege.  Which explained all the formal black.

Hurriedly we jumped out of the procession, concerned that we were intruding on someone’s grief.

That was when we saw two girls with placards.  Standing silently as the men and women, teenagers and tiny, tiny children streamed by.

The chanting wasn’t for a dead person.  It was for un-persons.  And they weren’t dead.  Not unless you can count a collection of cells that was never born: living, and then when they are no longer supported by a host: dead.

For this requiem was by Bishop Julian Porteous, lamenting, then lamenting and lamenting some more, in this, the March of the Unborn Child.

I was taken aback at how moved I was by this display, but perhaps not in the way that Porteous and his flock intended.  I could feel tears pricking at the backs of my eyeballs, but not in sympathy for the so called unborn “children”, but in mourning for all of the women who have died in Australia due to abortions performed inexpertly and in an unsafe manner.  In regret, for all of the “unwed mothers” in the 1960s and 70s who felt they had no option but to give birth to unwanted children and then adopt them out.  In sadness, that we live in a country where a woman’s body is deemed by some, to be the concern of a third party.  In fear, that a Woman’s right to choose when and if she wants to have a baby, could be taken away.

Should some interloper deem it their business, to decide what a woman can do with her very own body.

I sank to the curb, the strength that I usually possess evaporating from my legs, and watched with the disgusting fascination that some people have for car accidents, as the parade of the self absorbed and the righteous trudged by.  They had their eyes forward, fixed on some point in the distance, like zombies approaching a feed.  At least the adults did.  The children, children from parents who wanted them, tried to lark and play but they had their hands gripped, and restrained to somber, as they approached the cathedral.  For this was not a day of exuberance, or of joy, or of freedom.  This was a day of repression and stifling and silent suffering.

From my curb-side position I watched those gorgeous two with their little signs: NEVER AGAIN and MY BODY, MY CHOICE adorned with pictures of coat-hangers, and I admired their energy and enthusiasm and their virile youth.  I adored them for choosing to be here, in this place of frowning, filling the space with light and love and acceptance.  I admired their cheeky freedom.  My heart smiled and sighed with their bounding potential. 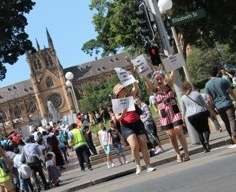