When I was a child I adored Marcel Marceau. He was magical to me. His cracked white face, his pointy red lips, his jaunty hat when he was playing at Bip. He was mesmerising. I always thought he had kind, sad eyes. He seemed to smile with his mouth, but never his eyes. 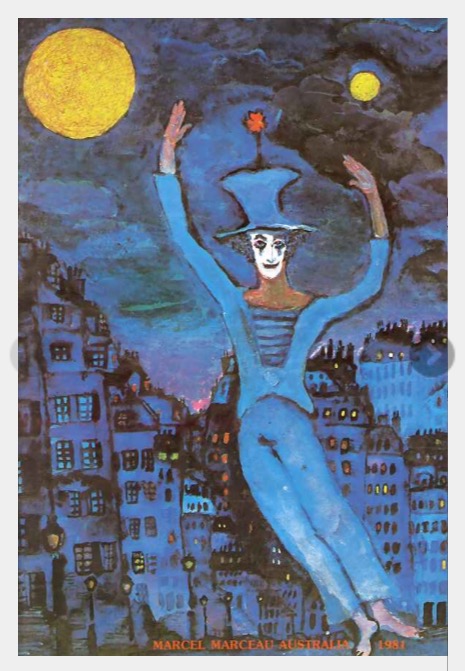 One cold and wondrous Melbourne evening, I had a steamy bath, and instead of donning my fleecy PJs, I put on my matching quilted brown skirt and vest, with my floral and flowing shirt underneath, and my best brown knee-high boots. (Don’t all the best adventures start with a shit-hot pair of boots?) I brushed and brushed my long hair until it was buffed to a brassy sheen, and Mum let me have a tiny spray of her Arpege. It made me sneeze, but I pretended I liked it, because: adult.

I think I must have been ten years old, going out, after dark, with Peter, my superior Dad. And without my pesky little brothers. I felt like a princess, except better, as I was pretty sure that tiaras would be uncomfortable after a time.

Many of the details of the evening are foggy around the edges these days: I don’t know how I came to know about Marcel Marceau, I don’t know why I was given this gift of tickets to see him. I don’t even know the year, although I assume it was around 1981, when he toured Australia.

My Mum kissed me off, and Peter and I disappeared into the dark night with a roar of the V8 engine: my silver Holden carriage.

I feel like we parked in Market Lane, although that can’t be quite right, but I remember that the shiny cobblestones were slippery under my booted toes, and I had to skip lightly over them to keep up with Peter’s long, languid stride.

Just like in a play, the next scene found us seated in plush red velvet seats, high above the stage, looking down at Marcel’s white lunar face, as he tried to find his way out of what must have been a maze of mirrors. As he felt his way around the walls, I willed and willed him to get out safely, and not remain stuck in the labyrinth forevermore. Just as it seemed that he would gaily trot his way out, he smashed into one final mirror, with a bang that almost made my heart stop.

The most surreal thing about the show was the complete absence of sound. Marcel wore soft black slippers, which made barely a whisper as he flowed over the stage, and he held the entire audience in complete and utter rapt silence.

I was no stranger to quiet, my grandparents were deaf, and it was common to visit their home without a word being uttered, but this was different. There was none of the gentle slapping of winged fingers making shapes in the air, no grunting laughs, no clapping of hands to get your attention. It was as though noise had been cancelled for the evening. It was enchanting.

Cut to the next scene with Marcel performing the ‘Seven Deadly Sins’. The references were mostly lost on me, but I loved watching him hold up an ornate, furled parchment at the beginning of each sin, and I tasted the new words on my tongue: Gluttony, Envy, Sloth, Covetousness, Anger, Pride. They sounded exciting and mischievous. I thought I would use those words in my diary very soon. And then came the last: Lust. Lusssst. I whispered it in my head. Peter shifted almost imperceptibly in his seat, and my child-antennae that was precisely tuned to signs of weakness and discomfort, whirled around to face him.

“What’s Lust?” I whispered, loud enough for ladies three rows behind to titter.

I have no idea what the poor man said, but I know I was fascinated by the word for months afterwards, and would use it as often as possible in the schoolyard, “I lust after Paul Stanley,” I would proclaim to my friends, “Shandi is such a lusty song,” and they would nod along wisely. We were ten. We knew all about lust. (And what we didn’t know we pieced together from surreptitious glances at “Where Did I Come From?” or “Forever” by Judy Blume.

Finally, one night at the dinner table, one of my little brothers let out an astonishingly loud belch, and I said, “Oh, that was an amazing sign of gluttony, you must be very proud. I lust after a burp such as that.”

Mum threw her serviette into her gravy, told me that enough was enough, and I was to stop using the word lust, in fact I was to stop with all of the deadly sins, immediately. They were after all, deadly. And sinful.

I hung my head a little, to show I was suitably shamed, and went off to my room to listen to the latest cassette they had given me. Perhaps you’ve heard of it? It’s called Welcome to my Nightmare by Alice Cooper, and I was intent on learning the lyrics to Cold Ethyl. They seemed quite lusty, in a strange cold, dead necrophiliac kind of way.