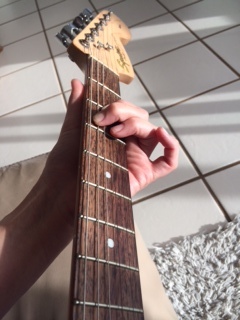 I overheard myself last week saying, “I’ve always wanted to play an instrument.”

Clearly I am a liar, because at 43years of age, I have barely ever picked up any instrument, other than to move it out of a thoroughfare in this hovel we call home, or to wipe dust off it. In this house there are: two ukeles, one drum kit, one violin, two guitars, one clarinet and various blues harmonicas. Along with a keyboard that comes to visit every now and then. So it would seem that it isn’t a scarcity of equipment that has prevented my burgeoning musical talent from blossoming.

The reason why I can‘t play is because I don’t.

This week I decided to remedy that, and in a pique of inspiration I did what I always do when I don’t know the answer in this brave new world: I ask Google, or someone under fifteen.

Google told me I could learn three chords and play ten songs, seemingly within minutes. The App Store told me that I could have a free virtual teacher at my disposal with a push of a button. The under fifteens said, “Hmmm, it’s harder than it looks, Mum. You have to practise. A lot. And you have to, you know, listen to the beat of the music and follow the rules.”

“Piffle”, I thought to myself, and did the next thing my goal book said to do to successfully achieve something: I told Nath (loudly) that I was off to learn the guitar, and I would be back with a song presently.

By and by, after many repeat viewings of the YouTube clips my new friend Stephen put together for me, my neck began to ache from hunching over the frets, and my fingertips slowly lost any semblance of feeling. Other than pain, that is. They could still feel pain.

By and by it became apparent that even though my fingers are small, strong and nimble, and seemingly perfect for playing guitar, they are also very stupid. It came to my attention that they don’t learn new things as easily as I had hoped, and so it came to pass that my much awaited debut of that classic piece: Hound Dog, would have to be postponed until my finger pads recovered. (And I was somehow struck with musical talent.)

For even though I was kinda sorta learning the chords okay, the ability to play music requires some other skills to come together. Not only is there all of the intricate movements of the left hand to make the shapes, the right hand has to strum, and the strumming has to follow an unvarying routine, for it all to sound anything resembling a song. Stephen keeps breaking my pretty shapes into lots of a dozen, and then tells me to make them for four or three ‘beats’. He has never said how far apart these beats are. One second? Two? And how about this little group of twelve that is to be repeated until the end- how long is that? I could put on a timer if I knew. I’m good at timing. Doing things without proper rules? Not so much.

I googled all sorts of things about tabs vs chords, about the length of a bar, about where to hold the strings down. The information was strangely elusive for a discipline that is purported to be based on simple rules.

I sought the advice of the children. They are how somehow imbedded with the knowledge, from years of music lessons imprinted on open minds. Which means that they don’t know the specifics of the questions I’m asking. They just look at me strangely and shrug, whilst blowing, banging or strumming familiar tunes. “You just listen to it and play it, Mum,” they say. Which is exactly what they do, and precisely what I can’t.

I asked Liam a question about the production of a particular notation on the music sheet, and he sighed, picked up the guitar and said, “This should explain it.” He proceeded to play some notes (I guess they are called notes), that kind of sounded similar (where they the same?) down the neck of the thing. “See?” he asked, expectantly.

I had no idea what he was on about, so I just nodded my head. This seemed to satisfy him. So at least I still know how to act like a ‘good student’ regardless of any actual learning taking place.

All I can say, is Playstation, you have a lot to answer for. And Real World, you are nothing like the virtual world makes you out to be.

I think it’s time to go back to Guitar Hero.

I hope we didn’t sell it in the garage sale.

Have you tried to learn anything new as an adult? Is it hard?

And by the way, how good is Playstation?