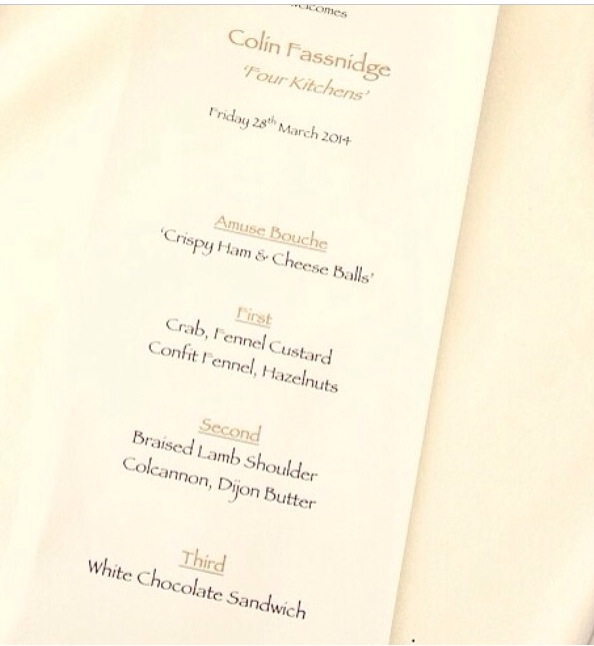 As you know, I is well fancy, and I might have mentioned to you once or a thousand that I had dinner with Jamie Oliver last week. Which is amusing to me mainly because I hate cooking and most things to do with cooking.  Other than the eating bit.  I’m fine with the eating.

Which is why I decided to score myself, and some lovely ladies who lunch, a ticket to go and get fed by one of the judge-chefs from My Kitchen Rules.  I have watched the show enough times to know he is the ‘mean one’ and so I was gleefully rubbing my hands together (maniacal laugh), thinking of all the things I was going to find wrong with his cooking, and then write them up here on this blog for all to see.  I’ve dined with JO, remember.  So I’m basically a food critic, yeah?

Problem 1:  Colin wasn’t doing the cooking.  They were his recipes, sure, but the Berado’s dudes were cooking them.  So there went that blog idea.  Fkit.

So I thought I could still make some funny about him anyway.  Because he’s the mean one, right?  So that means open season, doesn’t it?

Problem 2:  When the dude got up to speak, he was blushing.  And kinda cute (that makes it hard for me to be mean right there- call it a character flaw of mine).  And we all* know I’m a sucker for an Irish accent.  Then as he spoke, we found out that he wasn’t the mean one at all, he was really very charming and candid, and grounded, with a wife and family, and the same concerns about making a living and a life that we all have.  He told us how he went on the show to promote his brand and his restaurants, at a time when friends of his in the industry were being forced to shut their doors due to the global financial concerns.  He told us about how hard he works, and why he is a chef (Yep, it’s a passion for food), and told us a bit about his creative process.

One thing I especially liked was how he claimed all of the recipes in his new book (which he just so happened to bring about a hundred copies of along, ready for signing) are the result of mistakes.  Of things he tried, found to be wanting, made some variations and eventually resulted in something tasty.  (I suspect the fennel icy-poles in the book are still in the development stages.)  I think that’s a great reminder.  I still don’t give a shit about the cooking idea, but I like it as a metaphor for other stuff in our lives.  Mistake>Edit>Correction>Success.  Or something like that.

So all in all, in a week of two chefs, it was a funny one for this little food-bogan.  I met Jamie Oliver and he was exactly like he is on telly.  Casual, a little scruffy, funny and just like one of my mates.  Just like I thought he would be, in fact.  I met Colin Fassnidge and he was nothing like he is on telly, and so probably has to spend a whole lotta time not reading stuff about himself on the socials, and explaining how he isn’t like that actor at all.  So basically, the opposite of how is presented.

I know who I’d rather be.

Perhaps there’s a lesson in that…?

“Be yourself.  Everyone else is taken.”  -Oscar Wilde

PS I forgot to say, Colin let it slip who wins this season of MKR… I can tell you, but I will require recompense.**

*Well maybe YOU didn’t, but the entire staff and patronage of PJ O’Brien’s circa 1997 does.  (And now so do you.. Don’t say I never tell you anything.)

**I may be lying, but you will have to hand over the moula to find out.