Deck the Halls (With Christmas Crappery) 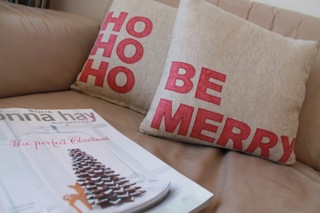 By all reports, things have officially gone nuts “out there”, so I have retired to what I like to call THE COMPOUND. I do it every year around this time. All you extraverts can have the shops to yourselves. I’m IN for the Season.

Once school breaks up I try not to go out in the world if I can at all help it. To get to the beach I go out my back gate and cross the road, so I include that as my compound. I may occasionally be spotted in public places when the lure of fancy champagne gets too great, but I keep my appearances fleeting.

Working from home has compounded my compound lifestyle, and one holiday season I only drove the car twice in three weeks, (which is my personal record). It was an amazing feeling once I jumped back behind the wheel- I felt like a P-Plater again, and if it wasn’t for the babyseats in the back, I reckon Nath might have found out the full benefits of the modern split-seat configurations.

It appears the children have inherited the hermit gene, as they have not asked once to go out into the world. I suggested we pop to the shops today, for I am in desperate need of some Pearl Cous Cous, and they wrinkled up their freckled little noses and said, “Can’t Dad get it on the way home?”

Yes, my little troglodytes, he can. Rest easy, you can stay in your pjs this day.

So, as I have no news from the outside world, I thought I would share with you some of the Christmassy things from The Compound. It turns out, that not only am I a recluse, I am a crazy one. No, it’s not cats I collect (One #shitcat is enough thanks). My collectables are all things Christmas. (Oh, and Pez dispensers, but that’s a story for another day).

So here are a couple of things from my collection of christmascrap: 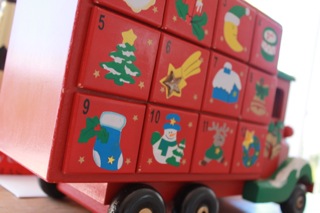 The “Elf Truck”.
My biggest festive success and failure in one handy truck.
Success: the kids go NUTS over the fact that the elves deliver two tiny presents into the corresponding drawer every.single.night.
Failure: See ‘success’ above. EVERY.SINGLE.FRIGGING.NIGHT!

This is the “non-crap” corner of the house.
A clever craftmaster friend made these cushions. Coupled with DH’s ridiculous standards of Christmas styling… This is the daydream area of The Compound. 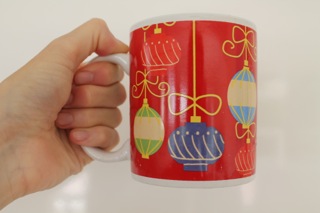 And yes, I can crapify even a lovely Chrissy sanctuary (above) with this shit christmas mug. I drink the brown life-elixir from it every day from the 1st of December…. 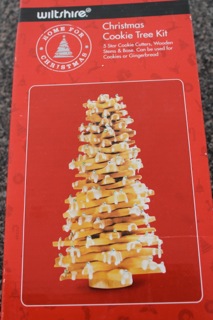 We try this every year. The results are always craptacular, and nothing like the DH version above. 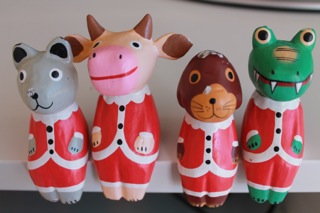 The kids call these the NutNut animals (I know: weird) they are from Bali, and all I can assume is that the Balinese have no idea what Christmas is, but they do know that idiots from Australia really will buy anything if it’s cheap enough. QED. 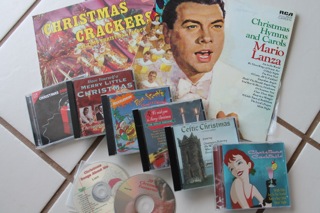 Necessary to set the mood, no? This is a small selection of my stuff. (Yes, there is MORE on the ipod… Happy Days) 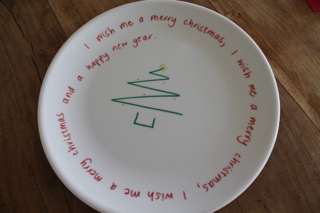 A few years back I was the fundraising organiser for kindy, so I needed to boost the numbers. Hence: my very own stylish picture plate. 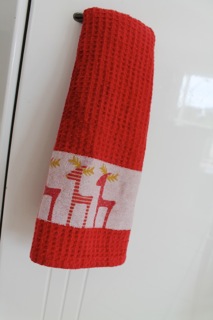 Of course there’s napery. SO MUCH NAPERY. For, who can resist it?? 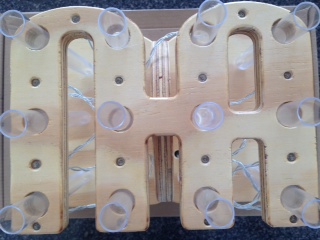 Test tubes. With red Christmas lights. Made in our initials by the talented Ben from Infinity Eco Furniture. I suppose you can guess what kinds of “experiments” occur when these babies come out to play… Let’s just say that what happens on the iDeck, stays on the iDeck (I’m looking at YOU Christmas 2013) 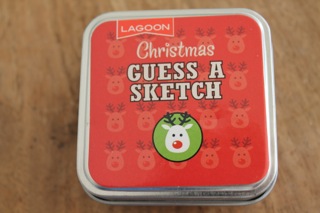 Oh yes, I will be subjecting people to Christmas games… 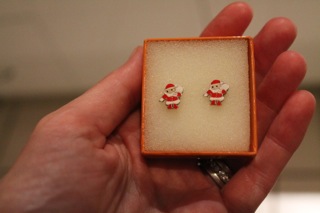 My Christmas earrings. There is more (oh so much more) where this came from, but I thought I’d just show you the classy shit. 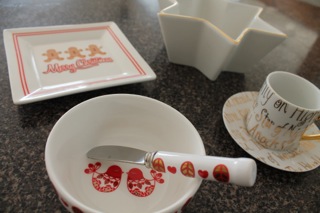 Christmas crockery.
There is SO much more than this, including (of course) an entire set of gold-rimmed crockery and glassware (minus one, as smashed by someone who WAS smashed back in the great Christmas debacle of ’09.) 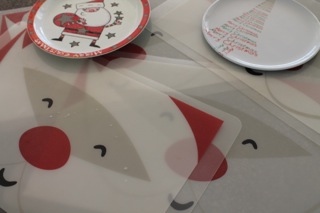 An assortment of crappy christmas tableware. A must for every tragic family.. 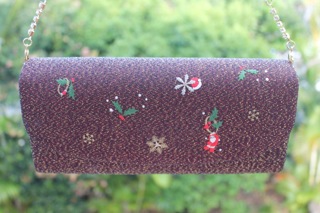 NOT crap!
My gorgeous chrissy handbag. It’s hand-crafted from a kimono, and was given to me a few years ago by the owner of “Kimono Collections” who understands and encourages my addictions.
I LOVE THIS BAG.

So there you have it, the tip of the Asher Christmas iceberg. Whew, I think I need a good lie down now….

The Story of Santa Chook

This is Santa Chook

Every year on the 30th of November, in the steaming heat of the tin-roofed garage, Nathan teeters on the top rung of the ladder to retrieve two dusty boxes; one massive box, gaffer taped in a way that suggests the heft of it’s contents, containing that oversized tree, and one smaller one- the decorations.

We know they are the Christmas decorations and the Christmas tree because my Dad wrote “Xmas Decs” and “Xmas Tree” on the sides of the boxes all those years ago, in his distinct, back-slanted script, that I no longer get to see fresh.  Back when those things still mattered to him.  Back when it seemed important to know which box was which.

We heave the boxes down and we puff them up the stairs, and we hold our breath a little as we see what treasures reside inside.

There are thrills of delight, and tinkling of laughter and bells mixing, as we remember things we’d forgotten.  We anchor them again in space and time, as we remember making or buying them.  We throw our mind’s eyes and our memories back to the when, of Christmas past.

Amidst the mirth of recollect this year, there was also melancholy, as it came to pass that Santa Chook was not long for this world.

Santa Chook came into our lives on Coco’s first Christmas.  We went to a work Christmas Party at a time in our lives when things weren’t easy or settled or at all party-like.  Coco was nine months old, and we were far, far from being at peace with her diagnosis.  I felt like life was careening around like a cheap plastic spinning top, the swirly picture on it moving faster and faster, rather than calming down, and I was dizzy with the vertiginous emotions of testings and procedures beyond my sphere of control.  Transfusions were unpredictable and often.  Procedures were unfamiliar and frightening.   Sleep was fractured and elusive, and I grasped the relief of forget that it gave, whenever it deigned grace me.

We took Coco to the party with us- it was that or not go- because it was the only way I could hold onto an atom of that adult I was trying to remember to be.

We played a silly game: The Present Game, whereby you can steal someone else’s present, or take a mystery parcel from the central mother-lode.

Randall unwrapped Santa Chook.  He was jaundice-yellow like my golden child, and his coat and hat glowed red with a sheen that only cheap plush made on foreign shores, with no concern for inhaled particulate matter can produce.  And when Randall The Mighty pressed the “press here” button, it was like the angels spoke to me, and me alone.  Santa Chook crowed his morning doodle-doo and broke into The Chicken Dance.  He was the first of that glut of animated toys, a wonder of 2007, and I knew I must make him mine.

All of that long hot Summer of Coco’s first year, Santa Chook distracted her when she was fractious, soothed her for a time, when what she really needed was blood.  The blood-red of his suit substituting, momentarily, for the life-blood.

Eventually, we put Santa Chook back in the box marked “Xmas Decs”, and we moved forward into a new year.  I would often consider getting him down from those dusty rafters, when days were difficult, when my arms ached to put that child down, for just a moment, without that persistent wail.

I never did get him down, most days just the thought of him would bolster me.  Knowing that I had him there, if times got too tough, that there was respite.  A potential.

This year, when we opened that box with all of the ‘xmas decs’ inside, I grabbed out Santa Chook and ‘pressed here’ like I always have, expecting him to herald the start of the season with his crackling warble, only to hear a tiny “crrr”.  Then nothing.

I’ve changed Santa Chook’s batteries twice.  I’ve cleaned out the craw that was half full of battery decline and salty moisture.  I’ve stroked and pushed and heimliched him, but Santa Chook is no more.  Oh Santa Chook, you saved my sanity, little mate.  You were worth every one of those nine hundred and ninety-nine cents that you probably cost.

Yes, I know he’s either a chook (no cock-a-doodle-doo) or a rooster (and not a chook), but Santa Rooster sounds wrong.