Truants? It’s all in the terminology (which we use loosely)… 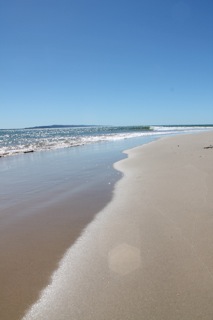 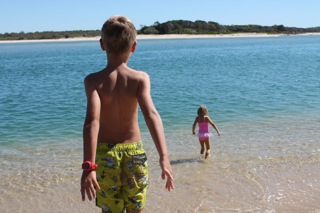 Last night was the coldest night ever invented.  Or something.  Which meant there must have been no clouds.  And around these parts that means one thing: beach day.  So we let these two Evil Geniuses prolong our mini-break (more about that later this week), and have a wellness day.  Some people just call it wagging of course.

We went to Asher Cove.  It is called Asher Cove because I named it, and then wrote this sign, so yeah.  Naming rights. 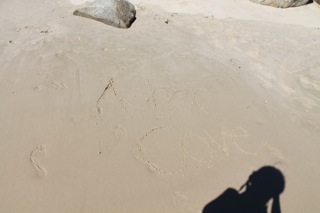 Asher Cove is “quite pretty”, so I took a pic to show you:

One day when I can be bothered I’m going to do that thing where you buy land in Scotland, and then you can call yourself Lady or Lord, by legally changing your name.  When I do, this cove will be my Kingdom (Ladydom?  Clearly there will be some brushing up on my lax terminology prior to this).

The Geniuses found a long flat rock that they decided was their investigation bench, and went about finding “interesting and investigatable things to investigate”.  So, as we are being a little loose with our terminology here, I suppose that is just what they did.  The “interesting things” were mainly shells, a feather or two and a tiny polystyrene ball.  The “investigating” involved them lining them up on the bench.  Best of all was when they found this “fossil”.  Liam was quite excited, and thought he might sell it to a museum for “heaps of money, maybe millions, enough to get a GoPro anyway.”

Check it out here, for free, while you still can: 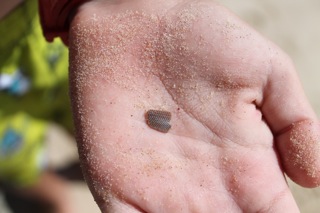 So, yeah, clearly a fossil.  It became something quite precious to these intrepid investigators.  Coco did this “diagram” of what the organism would have looked like prior to it being fossilised: 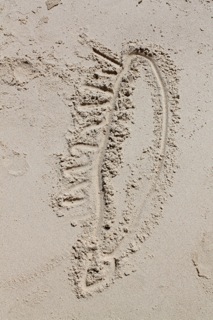 Clearly we have two future palaeontologists or scientists growing up in our home, such is their discerning and superior skill in rigorous methodology.  Especially useful is their ability to extrapolate simple findings to create complex ideas.  I’m sure you can tell by now I didn’t use the word “genius” flippantly before.  (I began to doubt the wisdom of us letting them have a day off from actual learning, as clearly they need every bit they can get.)

By and by, they had enough of their endeavours, had a fight over the fossil, lost it in the sand, and had to be separated before anyone got punched in the guts or nuts.  I know what you’re thinking: Parenting Geniuses.  And yes, I use the term loosely.

How was your day?  Cold?

Are you too raising Geniuses?