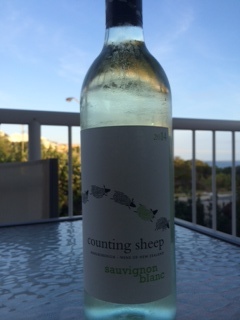 1.  The crafty ladies of Al-Lani’s Angels (they don’t know they are called that- only one of them reads the blog, so I’m claiming the naming rights) who made this motherlode of softies for the Mirabel Foundation. What a bunch of sweethearts they are!! And thanks again to Alisa from Plump for the donation of material. A very kind gesture, which saved me a fortune. 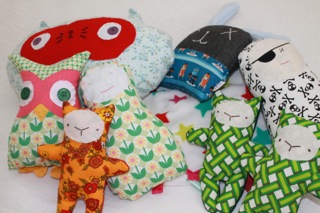 Here’s a small sample of what they made. They have multiplied now, but I won’t post a pic until I have them all in my hot little hands. 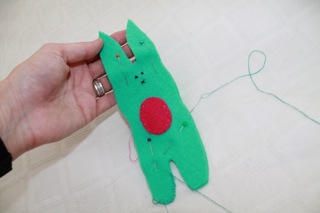 2.  Meetings with my goal buddy every Wednesday. We are having such fun dreaming up new ideas and playing with our goals. If you haven’t read the book Life in Half a Second, may I suggest you do, and then join in on the video challenge. It’s so much fun. Who knew? Who even am I?

3.  Seeing how excited the kids were this week preparing for their Christmas Concert. It was called The Christ (x) Factor. Same songs, new format. Sounds like television really. There was even a special appearance by a dude who came third in the real X Factor back when Kyle was on the show. He crooned us a cool Christmas carol. The kids went nuts. (And maybe some of the Mums)  I was too busy rocking in the corner because the canteen had run out of wine.

4.  Getting all the Chrissy shopping done and sent. Thanks to Liquorland, Clare Hammond, Sprinkles and Green B. I couldn’t have done it without you. And talking of Liquorland, do you ever save those shop-a-dockets with the two for one grog deals? I don’t usually, but this week I got the Savvy. It was totally drinkable. I said TWO FOR ONE people. Hop to it.

Not bad for a sundowner on a hot night

5.  Playing hooky with the kids today. It was a late night last night on account of all singing and dancing, and it’s raining today, so I’ve called it: Jammie Day. I have to go downstairs to work for some of it, but mostly today will be about lazing around, writing letters to Santa and reading books I think. The calm before the storm. School holidays start next week, and I for one cannot wait, so today we are having a preview.

Happy weekend to you all. Have fun putting up the tree on Sunday.

Join in and share the love: what are your hits of the week?

*Not a sponsored post. When o when is some grog or shoe shop going to contact me for sponsorship???