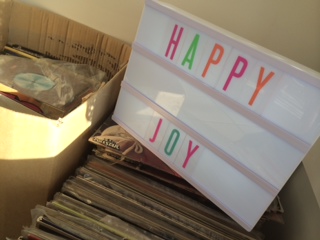 I was flicking around on Facebook, when one thing led to another, and before too long, I managed to procure what may (or may not) be the deal of the century. I found a woman on Bribie Island who was willing to sell me her deceased grandparents’ record collection for two pineapples. Or five lobsters, in the old measure. I couldn’t believe my luck. For not only did she want to sell for a song, Nathan and the kids just happened to be kind-of-almost-sort-of going past Bribie on Saturday. So I got a lifetime of someone’s music (or muzak as it should rightfully be called) without an ounce of effort.

That’s the kind of Christmas Sale transaction I like.

We (well, Nath) hefted that box of shiny black discs upstairs, and I spent the rest of the weekend sneezing, (old records really do have a distinctive smell) and singing along. Happy Days. (But not “Happy Days”, surprisingly there is no Happy Days soundtrack in the mix, although there are many, many more of that ilk)

As I flicked through the piles (I had them in piles so that I could immediately put them in alphabetical order- funny, I did this without even thinking) I silently wished I had this Modern Device: 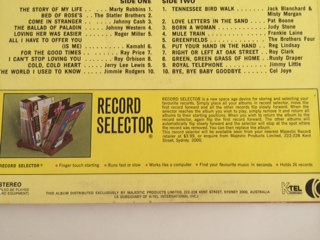 Can you read the text? It’s a SPACE AGE device!

yet still, labour or not- shrieking as I uncovered each new gem. Ol’ Joy purchased some pearlers and some shockers in her time, and it seems she had a particular penchant for the compilation album. Ahh, compilations, my second favourite genre. (My favourite is duets, if you have to ask)

I was deliriously happy as I spun disk after disk, finding that by some freakish sorcery, the words to these songs were stored in the back recesses of my gyri, intact, after all these eons. Lyrics to songs that, if you asked me, I would say that I am only vaguely familiar with, came flooding back as soon as the first verses began.

Sometimes I was a bit behind- like when you do that thing with your friend, pretending to guess what the other will say, speaking the same words at the same time in a kind of slow motion- but often I was right on time, knowing the words as if they were my favourite songs, now playing on 3XY.

I found a surprising joy in this. In finding that my brain somehow knew some things that I don’t. It was like there was me, and then another me, both sitting on the couch with a beer, familiar together, yet not quite sure what the other one would do next.

My favourite was when I played this album: 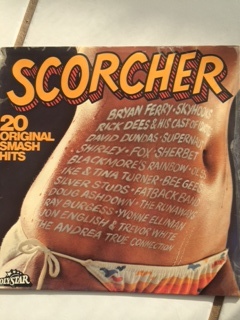 I remember the cover distinctly- Mum had it when I was a kid- and I knew it contained the tracks Disco Duck and Cherry Bomb, but other than that, nothing. It turns out that Old Me has some bytes of information stored up, and she knew all of the words, to all of the songs, even ones that New Me doesn’t really like. What fun. And what else is stored up there? Do I secretly know how to play piano or speak German, two things I have been exposed to, but have no working memory of? And if there is more up there, how do I get it out?

In the end I guess it doesn’t really matter, it will all come out when I’m old(er) and nuts and asking my children as they change my Depend, for Choo Choo Bars because they were-are my favourite confection, circa 1978.

Nathan and the kids were vaguely interested in all of my nonsense, but by and by they grew tired of the crackling and the scratchings of the turntable, and decided to introduce my to the soundtrack of their Saturday drive: Uptown Fudgey Wudge.

My synapses hurtled through time and space, one moment dealing with the tricky intricacies of stuffing those thin black circles pressed with the voices of The Temptations from long ago, into those strange clingy bags, to the next, downloading the latest Mark Ronson track (which is actually called Uptown Funk, if  you wanna do yourself a favour and go listen) and having it almost immediately available to listen to with the caress of a screen.

So we jumped and funked and grooved around the dance-floor to something that some guy probably could have made in his bedroom, and beamed to my phone the second after he pressed the STOP button on his Garage Band app. It’s probably not how it happened, but it could have. And that’s the crazy bit of Uptown Fudgey Wudge vs Karma Chameleon. Both are hits in their time. And both are fantastic in their way. Both make your feet tap and your brain smile. Both know how to pick you up and shrug off some of the load.

This morning as I write, I am looking up from time to time at the mountain of vinyl shoved in the corner, and I see I have inadvertently placed the early birthday pressie I procured for myself from Typo last week, on top of it.

Thanks Joy B. Thanks for taking the time to collect the songs of your life, carefully writing your name on their covers so that I can send you a cheers, whenever I take them for a spin. You made me Happy.

Do you still have a record player (yes, I know it’s now called a turntable)?

What songs are on the soundtrack of your life?