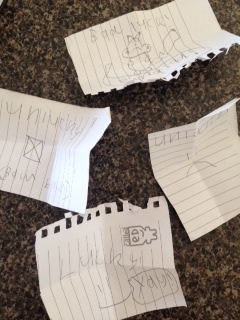 Today the Evil Geniuses had their first introduction to the evils (and merits, depending on which side you’re on) of gambling.

Evil Genius One (who is the true genius in this story), drew up four notes. See Exhibit A:

Exhibit A: The four cards. One says “bup-bawll” like the noise on Family Feud.

He placed these notes in a little box and began his spiel.

He talked long and lyrical about the lusciousness of Lindt chocolates (of which he happened to have a full box) and the luck we might encounter, by placing a mere fifty cents in his sweaty little palm. Fifty cents bought us one lucky dip, a one in four chance (which he assured us were ‘excellent odds’) of ‘earning’ a Lindt ball.

I had one dip, did my dough and declared myself out of the running.

Evil ‘Genius’ Two however, was smitten.

I told her to stop giving her money away. She said she couldn’t because “I’m so close now Mummy, I can’t stop. I just have to win one soon.”

I told her that wasn’t necessarily true, and anyway I had Mentos in my bag, and I would give her one for free.

I told him to give her a break and just give her a choccy. He said he couldn’t because, “That goes against the rules of the wager.”

Eventually she did get a bit of a run on, and won a few chocolates, to calm those jangly nerves.

At the end of it all I asked them if they had learned anything useful from all this illegal gambling.

Liam: Gambling is addictive and ace, especially if you are the one holding the cards. I don’t know why it is illegal. It’s an excellent way to make money, if you make the odds good enough.

Coco: Gambling is fun and exciting, a bit like a scary ride at Aussie World. You have to pay out a lot and you might have to be patient, but eventually you win. So it makes it worth it.

Epilogue: There are no Lindt balls left, and Coco has about 25cents to her name.