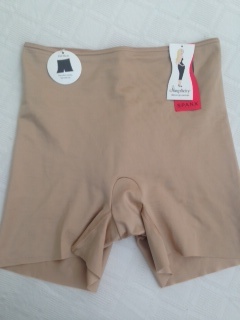 ...she shivered with anticipation as she realised that he wasn’t getting ready to play gently in her lady-garden, but that she was about to be punished, with a spanking…

Nah, just kidding.  We aren’t going to be talking about spankings but spanxings.  There isn’t much I won’t do for you RRs (well, maybe except for spankings), so I have done the research, and I’m back here with the report.  Don’t ever say I don’t tackle the big issues for y’all.

It all came about when I was shopping for a new outfit for THAT TALK, and the excellent chicks at Country Road were giving me the big ups, telling me how gorgeous I looked in this outfit, how cute I looked in that, and no, my bum did not look big in the other.  So big were the ups, that it came as quite a shock when I poured my all of my adipose tissue into a saucy little number that my new best friends said I would look so hot in, and they all stood back and said, “Hmmm.”

I could see there was something that someone needed to tell me, but I had no idea what it could be, when I was looking sooo hot.

At last, amidst nudgings and throat clearing, the speaker was chosen.

“Ummm.  I think you just need the right underwear.”

I craned my neck around (which I will admit made my chin to neck region look very taut and took years off my profile), to see the dreaded VPL.  I was already wearing the ‘right’ underwear.  Seamless.  Flimsy.  In fact, my best no-line knickers were apparently making lines, or more like, those little accent thingies (cedillas?), as they rolled in and out my undulating derriere.

Interesting, but strangely, not really the look I was after.

So what was this mysterious, and so far elusive ‘right underwear’?

“You need Spanx,” by stylish new friends said, “Get thee to Myer immediately.”

And so without further ado, I did as I was bid, and found myself at the mercy of a matronly type who peered at my flabby bits and hanging down blobs, over her spectacles, grabbing here, pinching there.  Not since that fateful day in the gym when the trainer used the callipers on what he euphemistically called my ‘skin folds’ and deemed me to be 33% composed of fat*, had my tuckshop arms, upper thighs, back and muffin-top undergone so many nips.  With many “Hmmmms” and a few “Ahhhhs” she stepped back and had a really long look at me, eyes travelling up and down my body.  I’ve felt more comfortable trying to jump the queue to a nightclub and letting the bouncer cop an eyeful.

“Okay, you need these and maybe this”, she said, handling me some bike shorts and a singlet in that fetching shade of beige reserved for medical apparel.  I held them up.  Yes, definitely medical, in fact, they looked Paediatric size.  “Go on,” the matriarch said, “go and squeeze yourself into them.  Let me know if you need… mumble help.”  I swear she said Vaseline.  I think she was smirking.

I won’t bore you with the hot and sweaty pushing and pulling and stretching and breathing-in details, but it came to pass that I purchased these:

They cost almost as much as the dress, which still hasn’t been worn, because the very day I was putting it on as quickly as possible to avoid anyone in my house walking in and seeing the horror that is my post-menopausal life, Nathan walked in.  And Nathan saw.

Saw me in all my latex-clad beauty.

He took one look, laughed, and left the room sniggering, but not without saying over his shoulder, “Nice Tour de Noosa shorts.”  I thought a pretty good swear in my head that ends with ‘off’ and thought other vengeful thoughts about how much marital bliss I would penalise him for, for that comment.

And then I looked down and my nude-coloured, shiny, bulging thighs.

I think I might be the one who isn’t getting any.

Have you been Spanxed yet?  What do you think about ‘shapewear’?

…From the Ashers xx