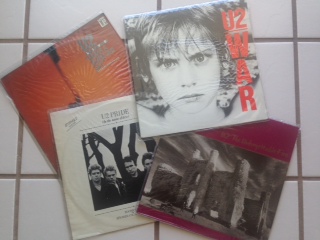 Vinyl.
Apparently U2’s free album is on vinyl. And it’s in the Top 5.
Even though we already all have it. For free.
What??

I mean they’re okay, I have a couple of their albums from another life ago, but I haven’t really thought of them much since the 80s. I like the 2Cellos version of ‘With or Without You’ and that song Bono wrote for his Missus on their anniversary ‘The Sweetest Thing’ is easy on the ear, but that’s about the extent of the notice I’ve taken of them since screaming out the words to ‘Sunday Bloody Sunday’ with my friends on the way home from softball carnivals, drunk on dust and sweat and victory.

I noticed them when Apple dropped some of their songs from the clouds and into my devices at little while ago. That was weird, wasn’t it? I got strangely grumpy for a minute or two, but mainly because I have no idea how technology works, and I didn’t like the idea of some brainy kid in Cupertino messing with my stuff. Then I realised if they wanted to, they could mess with my stuff any time they like, and hey, it’s free music. I tried to listen to the music from someplace else, but it felt just like that, songs that were meant for someone else’s soundtrack, someone who was having a different life to me.

So that was that. I’m sure those U2 fellas are okay with my ambivalence. Other people seem to like them just fine.

This week U2 were on the Graeme Norton Show. They played a song, and they were good I suppose, but most of my attention was directed towards Stephen Fry and Ironman and the stories that Robert Duvall had to tell about Brando, from the Godfather days. After a while U2 came and sat on the couch with the people from the movies, and everyone dutifully shuffled over, because the dude from the iTunes logo was in the house, and he’s pretty famous, right? Everyone deferred to the U2 boys and they seemed genuinely nice, and perhaps Robert Duvall looked a little confused, but hey, he can’t even remember the names of all the movies he’s been in, so that wasn’t much of an issue.

Eventually they mentioned that the junk-mail album is quite a pared-back sound, not full of digitised mixing, but something that sounds just as good acoustically. Cheeky Graeme jumped right onto that, and asked Bono if they could play songs from it with just acoustic guitars. He said they could, and, as if from the clouds, acoustic instruments appeared.

I think I said that I didn’t really care much for U2. Well that was a statement from before.

They played ‘Song for Someone’, and I don’t think I’ve ever heard anything so exquisite in my life. I’m not sure if it was watching those four men becoming boys in front of my eyes to work it all together like some piece of precise machinery, whether it was the emotion thrumming and coming off Bono’s whole being, or whether it was the unexpected the sounds that he can make with his voice, and nothing more.

The show finished, Graeme waved goodbye, and the credits rolled, and I just sat on the couch, staring at the blank screen, wondering what had just happened.

How did U2 know to make a song just for me?

I think I like to believe that each one of us has a purpose in this life. Not necessarily something God-given or anything like that, but that we each have something meaningful to contribute to our own lives, and if we are lucky, to the lives of the people we love. I like to think that we all have some special thing that is just us. Just for us, and something that is uniquely ours. I suspect that is why in our quietest moments we can feel a yearning, a feeling that we have something, some spark, some distinctive thing, that separates us from the person next to us, even though we share almost the exact same genetic make-up. I think it’s the reason we strive. We want someone to notice our thing. Maybe even love us for our thing.

Sitting there on my couch, late on a Sunday evening, I felt privileged to share in Bono’s thing.

It was a bloody good thing. The sweetest thing.

Do you know what your thing is?