Sunday nights in 1991 were something special.  They were the night when I returned back to the freedom and frivolity of uni life after spending the weekend at the place I still called home, where I’d been catching up with the friends from my childhood and earning my drinking and petrol money for the week.  I would unpack all of the frozen and packaged food, that I’d foraged from my parent’s pantry; hearty stews, pasta sauces and cartons of eggs, and load up my bar fridge for the week.  I would unpack my freshly laundered clothes, (somehow they always managed to get back into my bag stain-free and ironed with precision), and give my time-table for Monday a quick once-over to make sure I was up to date and ready, for the day ahead.

All of this was done with a sense of urgency and delicious anticipation, for Sunday nights on 4 West at Menzies College were the best night of the week.  Forget Uni night, Bar night or even Wednesday nights at Chasers.  Sunday night was Simpsons night.

We used to rotate rooms, and the screening would be held in whoever’s room had the home brew in it.  That was the other reason Sunday nights were sacrosanct, they were Home Brew Night.  Someone, sometime had procured a beer still, the original owners had long since graduated (or not) and the skanky, yeasty thing was now owned by the collective.  The brewing instructions were written on the side in texta, and when it was your turn to have the thing in your room, bubbling and stinking up your clothes for the fortnight or so, you were the host of Sunday nights.

As many of us that were back from our expeditions to the real world would crowd into the host room, and if there was any brew left from last time, we would partake of a sensible and responsible amount, to lubricate the evening.  If a new brew was hatched, then we would do just the opposite.

Back then The Simpsons were hilarious.  They were edgy and almost risqué and captured the gestalt.  We thought the makers were funny and clever, and by being in with the joke (unlike the purveyors of our weekday food and washing) we were also funny and clever.  And of course if there was brew to be imbibed, were were funnier and cleverer.

I haven’t watched The Simpsons in a while, probably because I am too old and cynical to think the jokes are still funny.  Or maybe I’m scared that I won’t even get the joke.  Whilst I was watching some middle class middle aged tv just then, I saw an ad that said The Simpsons has been running for 25 years.  WHAT?  Twenty.Bloody.Five.  That is an awful lot of writing lines on the blackboard for Bart.  A lot of ‘hmmmm’s from Marge.  A helluva lot of ‘DOH’s for Homer.   I’ve never done, or had anything in my life for that long.  Oh, except a pair of Doc Martens, but they would survive the nuclear winter, so I guess they don’t really count.

So Cheers to the creators of The Simpsons.  Happy quarter of a century.  Thanks for all the laughs.

Here is one of the original cells, that captures one of my fave Simpsons moments.  Any time I look at it and hear Homer in my mind’s ear saying “Argh, Shark Boy!” I laugh.  Still.  I think that is a sign of funny and clever if there ever was one. 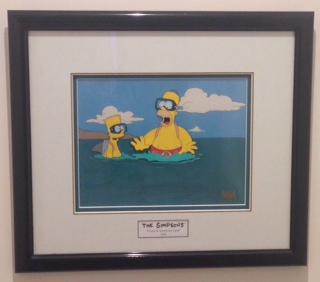 Oh, and thanks a LOT Simpsons for making me feel old… And yet somehow young again.

Do you have a fave Simpsons Ep?

Who is your fave character?  (Mine is Ralph.)