I may have mentioned once or twice that it was our ten year wedding anniversary the weekend just gone, and that we had two nights of unbelievable freedom without the kids.  When you are unaccustomed to having time to yourself, without people smaller than you demanding that you be their slave, all of that liberty can be a bit overwhelming.

At first I did this: 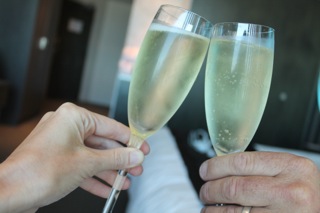 Until, finally I had to admit, I wanted, nay, needed some more intense pampering.  So I decided to venture outside of the actual hotel, and get a pedicure.  That was until I discovered I could get something called a ManiPedi for 50 bucks. Oh, hang on a minute whilst I consider thisSOLD.

So off I toddled to the nail place for a pamperama. I want to tell you it was lovely and beautiful and relaxing and I came out with awesome nails. One of those things happened.

I was ushered into a crazy looking chair, and motioned to choose a nail colour whilst putting my feet in the water.  No mucking around.  All of this was communicated by gesture and grunts as my technician spoke very little English.  I did what I was told. My tiny lady looked as though she meant business.

So I sat back and tried to relax as she started in with the first of her tools. I’m pretty sure it was a coarser version of the Microplane we use for grating parmesan cheese. It’s safe to say I was shitting myself. The microplane was followed by sandpaper, pliers, little sticks and a thing like a tiny orbital sander.  I wanted to pull away and run away, but I didn’t dare move.

As there was not much conversation I went into observer mode, and this is what I saw:

There were four other clients in the salon.  All were young, with perfectly plucked eyebrowns (I suspect they had just come from a ‘Brow Bar’, yes that is a thing now) and extensive make-up, and all were of large endomorphic body habitus.  I suspected all the primping and preening might have been an exercise to detract from the lack of actual exercise.  It wasn’t their size or over-grooming that was the real issue though, it was the fact that they completely ignored the girls who were kneeling before them, sloughing off their dead and cracked skin, whilst they texted and emailed and chatted about a boy one of them liked, or didn’t like, and whether they would wear the Chanel or the Gucci this evening.

Meanwhile the little slips of things, sanded and rasped and clipped and nipped the feet in front of them with speed and skill, also dressed from head to toe in Chanel and Gucci, but the fake kind.

I watched my lady, and tried to guess her age.  It was hard to say for sure but I thought she might have been the right age to be born sometime around the Vietnam war.  A time when US forces saw fit to spray and spray the people and the country with defoliants.  Defoliants that were later found to cause birth defects.  Birth defects not unlike her cleft palate, inexpertly repaired and stitched.

So I sat back and tried to relax and relish the experience, but all I could think of was how bloated and entitled I felt, having this lovely little lady slave away on my feet and later my hands, earning who knows what, but certainly not enough, per hour.  Breathing in even more chemicals from the creams and polishes. Into lungs that had already breathed in too much horror.

Eventually it was all over and I was told, “Is good. You done. You go now.” and I was released into the fresh air of the world and the sunlight of life, and I admired my nails, perfectly groomed and shaped, and painted a striking shade of (agent) orange.

Have you ever had a ManiPedi?  Did the fumes make you swoon?