Here’s the hits of the week: 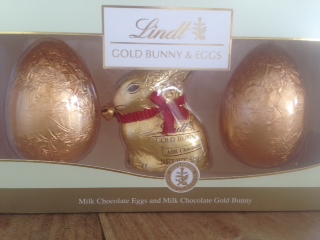 A lovely patient gave them to me this week.  Two boxes.  They were meant for the Evil Geniuses, but, you know, the Easter ship really had sailed, and, I think it is best that they receive information on a need to know basis.  So, umm, kids, you don’t need to know about these.  I’ll take good care of them.  Promise.  Hope you aren’t reading the blog this week Liam (Or you lovely Nadine).

2.  A good week.  You know, I can admit it now, but I never really thought Coco would go to school, not formally, and I never thought she would be able to do weeks and weeks at a time without days off to rest and get her energy levels back up.  I have always known that she’s pretty sharp, but I guess I never dared hope that her life would be pretty much like other kids, at least on the outside.  This week it has been fun to look back on how far she has come, from a tiny yellow tot who was pretty touch and go for a while there, to a bright, funny little ray of golden sunshine that skips off to school every day.  Even if she has recently taken to making cawing noises like a crow at 6am.  (WTF?)

3.  Having the opportunity to pick Liam up from camp and listen to the endless chatter, each word tripping and tumbling over the next, to get it all out.  He was trashed, dirty and asleep by 6pm, and he had a wondrous time, treading his own path.  For those RRs, did he come back changed?  Well yes he did.  I noticed a quiet and  confident determination when he said he won’t be sleeping on the bottom bunk next year (he has done so for the past two years at camp).  I haven’t seen that before, usually he  will acquiesce just to keep the peace, but it seems that enough might be enough.  He is also, by his own account, braver.  He said the Giant Swing was “terrifying until I did it, then I was exhilarated.  Just like you said.”  Winning on two counts: He did it, and I was right. (Recording that right here for posterity and teenage years).

4.  I’m a bit of a reader.  I like books, paper books, with covers and scoliotic twisted spines, and pages that want to be loved with spilt food and dog ears.  But increasingly I’m doing more and more of my reading on screens.  Mainly blogs at this stage, but also a book or two.  It’s weirder than when I sold all my vinyl at the record shop in Altona and replaced it with CDs.  Here are a few of the blog posts that I liked a lot this week: Fat Mum Slim,  A Life Less Frantic, and  Anna Spargo Ryan (of course).

5.  And one last thing, regarding all things reading… I might be late to the party, but I’ve arrived.  I am currently reading a prescribed text from my astrologer (yes this is now a thing over here at The Ashers) who thinks I should write some Clit Lit (She may well have actually said Chick Lit, and I misheard her), regardless, she said I must read at least one of the 50 Shades books.  To save embarrassment at my local bookstore I have downloaded it to the iPad, and I’ve gotta say, so far I’m a bit cross about spending the $7.99.  I say a “bit cross” when what I really mean is absolutely outraged.  IS THIS FOR REAL?  Did 50% of the females of the Western World actually get through these.. things (I will not call them books, that is an insult to all of the other books on my iPad)?  I find myself getting very hot under the collar and passionate as I’m reading, not from the sauciness, but form the pure horror at the writing.  And the publishing.  And the waste of paper.  Jeez, if she says Jeez one more time I’m gonna go all Flappy Bird on my device and chuck it onto concrete.  Hard (ooh, but not as hard as Mr Grey’s throbbing member).  But I digress, what I really want to know dear RRs, is: Have you read any of them?  Did you actually like them?  And, if you don’t mind me asking, what did you like the most?  Is it just the dude, or do you like how she is such a twit?  etcetera etcetera.  Do you want me to write you a rudie book like my astrologer says?  And then, finally, why oh why did I just pay a bill online, that had a big throbbing red button saying submit when I’d finished entering the data?

And on that note, have a ripper of a weekend.. Seeya Monday.

From The Ashers xx