I Have a Confession: 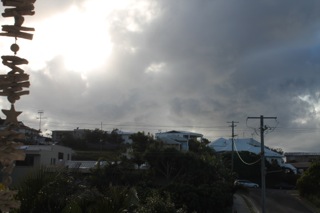 I have a confession to make.

The kids and I started doing a hybrid-style yoga thingy that I made up a few weeks ago, in an effort to counteract all the forward head carriage that I am worrying and worrying about in children these days.  All the devices.  All the gaming.  And all of that four or five kilograms of cranium sitting forward of it’s optimal position.  Putting all that strain of the anterior structures.  Messing with optimal neural function.

It’s my latest thing, this anterior head thing, so I decided to start in my own home, and get the kids yoga-ed up.

The first thing I found out (after noticing that I am, in fact, quite shit at yoga) is that I can’t touch my toes.

I know.  The shame of it.  The smug little chiro doesn’t have normal range of motion of the lumbar spine.  Great.

Flash forward a few weeks and the Evil Geniuses have long since grown tired of this early morning yoga-ish idea of mine, but I can’t let it go.  So today I was out on my balcony in the drizzling Sunrise cool, when an extraordinary thing happened.  I was doing my modified Sun Salute, and by modified, I mean the only bit of it I can remember from ten and a half years ago when I did some pregnancy yoga classes.  Back when my mind was still intact, and I could in fact, touch my hands on the ground.

I was looking out towards the beach, observing the grey sky, and trying to be at one with nature.  To expand my mind, but not to engage in any thoughts.  To be at peace.

In reality I was making a list of the tasks of the day, wishing the clouds and the winter away, and thinking how, yes I was doing a kind of yoga thing, but that it wasn’t enough.  That ten minutes a day didn’t really cut it.  That these meagre stretches weren’t enough to reverse a decade of bodily neglect.  That I wasn’t stretching enough, meditating enough, doing enough, being enough.  That I had too much to do today and I wouldn’t get it all done because I didn’t have enough time, enough energy, enough ambition.

It didn’t matter that these ten minutes were ten more than I did a few weeks ago, I still judged myself unkindly and harshly, because I wasn’t enough.  I wondered if I would ever be enough.  Have enough.  Do enough.

And it got me to thinking and sifting through all of the internal dialogue to find all of the times in my life when I have said, “Good on you, you have done all that you could, and that is enough.”  There weren’t many times.

So as I stretched those contracted hamstrings, I started to stretch those neural pathways that keep me in stuck in place, the ones that belie that no matter how much I do, it just won’t be enough.  I breathed deeply into the tight muscles and the tight mind, and said out loud.  “I am enough.”

And as I did, my fingertips brushed the tiny, fine hairs on my toes.  Almost, almost, almost touching my toes for the first time in many years.

I looked up, just in time to see the sun break through the silver clouds.

Today is a new day.

And I am enough.

Are you enough?  What stops you from feeling enough?

by Alison Asher No Comments

So many blogs about Robin Williams today.  So many heartfelt sentiments.  So much discussion about suicide and depression and speaking out about our emotions.  So much, that I don’t feel like I have much to offer as a unique perspective, but somehow I feel want to say something, to mark this strange day.

To say thank you to a man who spoke to me as a young person in Dead Poet’s Society and Good Will Hunting.  Who brought me those stories at a time when they were just what I needed to hear.

A man, who it appears was wracked with internal conflict I know nothing about.  It seems to me, that might be just how it is when people are fighting their own internal battles.  When they try to explain, it just sounds like gibberish.

I hope that one day soon, that won’t be the case.