The Erythrocyte: aka Cutie Reddy (aka Don’t ask)

So today we went to the Queensland University bookshop.

Don’t ask. But yes, we are booknerds. And Uni bookshops are the best, aren’t they? All that promise. All that brain expanding material. All that DATA. Especially when you are no longer a Uni student, so there is no danger of anyone asking you a question from any of the tomes. There’s a tingly excitement that you can taste like metal on a filling at the back of your mouth. They make you zing.

I was slowly falling in love with an anatomy colouring book- adult colouring books are the new black right now, you know- laguidly stroking the pages and imagining soothing long strokes of colour along the Vastus Medialis, or perhaps bright little pops of colour for the eight different carpal bones (Yes I can still name them, but I do need the rude mnemonic to recall if the Triquetrum is actually next to the Lunate or distal to it. Sigh: Some things never change.)

I was awoken from my daydream by the kids who were mucking around with syringes.

I turned around to see Evil Genius One prepping to inject EG2 with some kind of red substance. “Here you go, Cokes”, he was saying in his best bedside manner, “just a little blood to top you up.”

I virtually lept over the mini skeleton in my path, screaming “Noooooo” in slow motion, like they do in all the good movies. I  say ‘virtually’ because I didn’t actually leap over the midget skeleton, more like, lept into it.

Oh well. As it turns out, micro-plasi-bones don’t do so well with leaping and crushing from 55kg women. (Osteoporosis?)

I blustered about, recovering some of the fractures, stuffing vertebral arteries back into their foramen, and attempting to put the spine back in line (I am a chiropractor after all, but fuck me if thoracics don’t just all look alike). I regained my composure as best as I could whilst blustering and promising to pay for it all. “No, no, I insist, I’ll buy the skeleton”, I said, all recalcitrant and embarrassed. “No, it’s fine”, said the lovely helper, “this kind of thing happens all the time.” Which of course it does not. Not even once, I’d suggest, by how quickly they tried to reassure me out of the sanctuary.

In the melee I had forgotten what had caused the original kerfuffle, and I looked over to see Evil Genius Two proffering the soft flesh of her forearm, and Evil Genius One attempting to administer blood. “What are you doing?” I screamed. “Stop it, stop that now, you don’t even know what blood type that is.”

The Geniuses looked up, their mouths: silent zeroes.

And of course they weren’t holding syringes with blood. Of course they didn’t find such things hanging about in Uni bookstores. They had pens. Red pens. Fashioned to look like needles. With red ink to resemble blood. For a lark. Because: Uni. (Cerebral Comedy.)

“Can we have them?” asked the Geniuses in perfect unison, “they’re ace.”

They did, and we almost did.

But not before one last question. From Evil Genius One.

I spun on my heel. “What?” Even in my altered state, and even with his pronunciation less than perfect, I knew he was asking if he could contract a sexually transmitted disease… And a crook, thick, weepy one at that. “What did you say?”  I turned to see him holding up a weirdly shaped plush toy.

My brain started to crease and fold in on itself. The sulci tried to become gyri, and vice versa. Nothing was quite right. And then some neurones from study-nights long since past, fired up, and I realised my first-born was holding up a Gonorrhoea soft toy. Nice one, Uni bookshop, nice one. And touche. I imagine there would have been a time in my life that I would have considered fluffy models of diseases de rigeur. But not now. Not today. Not with minors.

“No you can’t have Gonorrhoea,” I said, “at least not yet.” (I might not have said that part out loud)

He replaced the model, bereft. And I can understand. What mother doesn’t allow her pre-teen to cuddle up to a Gonorrhoea molecule at night?

“Well can we at least have this red blood cell?” asked the smallest Evil Genius? “it might give me goodluck next transfusion.” They looked up at me, eyes like ponds, willing me to allow them this faintly macabre teddy.

“Fine,” I said, wanting to appease and exit, “get the blood cell.”

“I’m going to call her Cutie Reddy,” said EG2 “because she’s cute, and she’s red.” (As you can see, I don’t call them geniuses for nothing). They both smiled. Apparently Cutie Reddy was a good name.

I remember thinking as we drove off in the car, that all in all, that this wasn’t too bad. Because: science. I mean, a red blood cell toy, it is kinda cute after all. Isn’t it?

Moments later, my reverie was broken by one of the geniuses chanting in a voice that was a cross between Chucky and that creepy REDRUM kid from The Shining: “Two sets of friends must die together.”

I did not look in the rear-view mirror.

I did not ask who said that (for of course I knew it would be blamed on the eryrthrocyte).

I kept my eyes fixed forward. And I drove and I drove, and I tried not to think. For, in the last eleven years I have learned one thing: If you don’t want to know, then Just.Don’t.Ask. 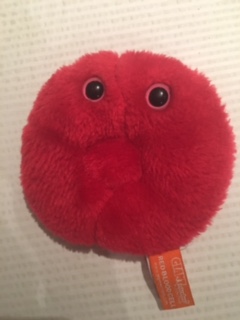 Here she is. Cute? And red.
…And a little evil, it seems…