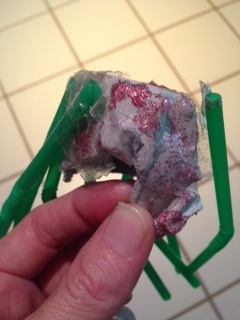 I had a bit of a big day in the office today.  Lots of people in a bit of bother, lots more hoping to get in this week.  I’ve been a bit busy.   I got upstairs just in time to see the final reveals of the House Rules gardens.  Phew.

I was sitting quietly at the kitchen table, inhaling my dinner, when I happened upon an egg carton cut-off.  You know the bit where the eggs sits?  That bit.  It appeared to have some kind of pink glittery crap smeared haphazardly over it, so I knew from experience that, in this house, it would be known as “craft”.  In addition there were eight green bendy straws roughly taped to the cardboard.  I say roughly because only half of them were really securely attached.  I counted the straws again, yes, definitely eight.  Which led me to believe that this craft was indeed something specific.  I think it may be known as “spider”, or possibly “octopus”.  Hard to tell which.

I held it up gingerly between my thumb and forefinger. Not ginger because there was any realism- I was not afraid of being bitten by the thing that I shall refer to as spiderpus, as it was in fact the shittest piece of craft I have beheld in quite some time.  “What, in the name of all that is holy, is this crap?”  I asked Nath, who had been present at the time of presentation.

He looked at me deadpan, “It is in fact Coco’s spider.  She has been constructing it at school for quite some time.  Today there was a gallery of all of the mini-beasts, where the parents could view such monstrosities.  It is an egg carton with eight straws un-securely attached.  I suspect she will not get an A.  I also suspect we will not be accused of providing assistance, or craft hot-housing our child.”

At which point we started pissing ourselves.  Perhaps I was delirious from overwork and hypoglycaemia.  That could be part of it, but I shit you not, this spider is truly the worst piece of craft I have seen thus far, surpassing even the Liam designed tuna-box, cotton-wool-ball and pipe-cleaner scorpion of 2012.  We laughed until we had tears.  Tears of joy at being such crap parents, that not only have we not provided sufficient craft-nurturing for our children, but also that we would find their ineptitude so hilarious.  We laughed until I might have almost done a little bit of wee.  Wee of relief that our kids obviously hold craft in such low regard that it is unlikely that we will be requested to create crafterpieces over the looming school holidays.

I can’t help but think of all the other parents, filing past the gallery of mini-beasts, fake smiles plastered on their faces, saying things like, “Wow, another octopus-like creature.”  And,  “Ooh, look, a snake(?), bat(?), centipede(?), ummm, thing”.  And then they would have arrived at Coco’s.  There would have been no.words.

I know what you are thinking: that I’m a bit mean.  That the kid tried as hard as she could.  That spiders can be difficult to create.

Okay then, get a load of this:

It has NO EYES. Or fangs. (Among other deficiencies)

I rest my case.

Post Script: Liam just saw the creation and said, “What the hell is that?”  Coco looked up from her breakfast and said with a half-smile, “Spider.”  Liam scoffed.  I braced myself for tears of outrage, or some such.  Coco replied with a shrug, “Beauty is where you find it Liam.”

And for a kid who is mostly yellow-ish and has limited enamel on her teeth, that’s not a bad personal rule.