I Don’t Mean to Bragg…

I first met Billy Bragg in the late 80s I think.  He was a bit preoccupied, being on stage and all, and I was a black dot of a face about ninety seven rows back, but I know he saw me and knew me, for he sang to me all concert.  It was like I had him over to mine, and he did a show in my lounge-dining area, but without the usual self-conscious discomfort that comes when someone performs in your face, such was the intimate manner he had.  He chatted to us, made us laugh, made us want to change.

He sang Waiting for the Great Leap Forwards and There is Power in a Union and Ideology and we rallied along with him, our hearts fit to burst with the things we would do when we got home.  He was clever and funny and charismatic and we wanted to be just like, him, hell, we wanted to BE him.  He changed the lyrics seamlessly to fit the current politics and our Australian situation.  It made us feel special that we knew that he’d changed them, for US.  It was like a reward for showing up and singing along, and that is how we knew we would be best friends forever.

But like so many BFFs we found that forever was a very long time.  And we fell pregnant, fell into a home loan and fell out of love with staying up late arguing about ideology over cheap port and cigarettes.

So when Twitter told me he spoke at March in March I was jealous and sad that I wasn’t there, wasn’t demonstrating.  That in fact, I didn’t even live in a city.  What was I doing when they were marching?  Sitting on the beach in Noosa watching this: 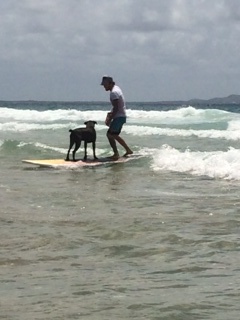 Which was vaguely interesting, but not really of any social import.

The thing is, I don’t think I’m active enough to be an activist these days.  I don’t have an old suit jacket with clever badges on it.  I still have my original Docs, but you can get a pair that look the same from Big W that are made in China and come with that weird paint smell, so I can’t even look the part any more.  Plus, I don’t have a clue what is going on.  Not really.  Not enough to get all riled up and shouty and fist pumping the clouds.  The last time I did a fist pump was on a girls’ night at the Surf Club, as we danced around our handbags and the DJ played ‘Jump Around’.

Sunshine and salt air and humidity have made me indolent and complacent and in need of a rest, rather than an arrest.  I have to say, that when I belt out Billy in the car these days it’s Little Time Bomb and The Price I Pay and Must I Paint you a Picture that I most resonate with.

Twitter tells me Billy is about to be on Q and A and I’m half covering my ears and my eyes are slitted, in case I see or hear something that might make me uncomfortable.  And I don’t like discomfort.

You can be active with the activists,

Or sleep in with the sleepers,

While you’re waiting for the Great Leap Forwards.

Did you March in March?

Do you love Billy Bragg?

…..From The Ashers xx