It has come to my attention that I might be a bit competitive.

I have two children, and I never let them win at games, because: character building. In fact the eldest just got his first pair of contact lenses, and we may be having competitions to see who can pop them in first. I have the very slight advantage of wearing contacts every day for the last twenty nine years. (But if you want to know, I am whipping that kid.)

Tonight I went to Coles, and I was doing that thing with a nubile young thing in tiny exercise shorts and taut brown skin. You know, when you pass each other in the middle of each aisle as you approach from opposite directions, because you are shopping at the same pace.

So I picked up my pace a little. “In your face, young thing”, I thought, as I prepared to intersect, not in the middle, but more up her end, near the salsa.

But she had mysteriously sped up too.

As soon as I got out of her eye-shot I hot-footed it around the bend only to find she was also moving quite swiftly. “I’ll show you, youthful one,” I sneered to myself, “I’ve been shopping a lot longer than you, and I already know which brands contain the dodgy numbers and which ones are the best value, I’ll sort you out once you have to stop and check where Greenseas catch their tuna. Or something.”

The thing was, as I picked up more and more speed, so did she. My old legs were beginning to tire. Hers were showing no signs of letting up. In fact, I think she was just coming into her stride. Faster and faster I went, grabbing any old stuff on the fly, filling the trolley with honey (I think we need some), toilet paper (we’re sure to need it someday) and eggs (we always need those little chicken menstruations to feed the ferals).

Finally, we had a little sprint at the end and arrived at the registers at the same time. I looked at her, she looked at me. I made the controversial decision: Self Scanning.

And you better believe I scanned those goodies like an Aldi checkout chick on cola. My biceps were bulging with the effort, my brachioradialis was burning with the speed. People were turning their heads, and staring in awe and disbelief. Or they were just looking around to see what all the grunting was about.

Finally, I escaped out of the refrigerated muzak box that is our local Coles, and into the freedom of the humid evening, basking, basking at my success. Shopping Superstar, 2014: Beating fit young chicks at the shops since 1991

I waltzed along in the afterglow of elation, secure in the knowledge that I may be ancient, but I can still pip the next generation at the post.

When suddenly, from behind me, there was a clash and a clatter of a trolley. And not any kind of trolley. I could tell by the cadence of the casters it was one of those svelte new mid-week shop specials, you know the ones with the wheels that actually turn and the smaller baskets? I turned my head as if in slow motion: my nemesis. She had a swift trolley, muscular legs and the eye of the tiger. I stepped up the pace as she caught up and passed me, racing to her car, which happened to be parked next to mine.

I pushed and pulled my dinosaur trolley as fast as my creaking articulations would allow, sweating now with the effort and keening internally at the anguish of being stripped of my prize.

We opened our car boots, me with an automatic push button thing, her with an old school key. We unpacked our trolleys bag for bag, hearts racing towards the goal. (Well mine was racing like I was about to have a coronary- her’s was probably beating at an even 68.)

Finally we were done, at almost the precise same moment. The moment of truth was upon us. To return the trolleys, or not?

I eyed off the distance. I questioned my ethics. And as I always do in these moments, I asked myself: What would my Dad* do? There really was nothing else for it. Trolley Return. I ran with the spirit of my deceased father spurring me on, I ran for all old ladies everywhere, I ran to prove that we are NOT old and irrelevant. I ran even though my shrivelled menopausal uterus was threatening to prolapse onto the asphalt. I ran for freedom. (Well, maybe not freedom. I may have been getting carried away. But I AM pretty sure Chariots of Fire was playing softly somewhere.)

I chanced a glance over my shoulder, only to see my competitor safely ensconced in her vehicle, trolley pushed haphazardly over near the planter boxes. SHE CHOSE NOT TO RETURN IT. As she slowly reversed her 1992 Fiesta into the traffic, she wound down her window (manually of course), and our eyes locked. Hers: bright and twinkling with victory, mine: rheumy and faded with defeat. She turned up her radio and the sound of some doof-doof-doof tune of success filled the night air.

I hung my head, with the shame of defeat and the heaviness of ethics bearing down on me. I shuffled back to my car, glancing at her abandoned trolley as I passed. In it, was a bag. I went over to inspect it, and, lo, she had neglected to unpack her final bag. It contained a few boring things, and then, the bounty: 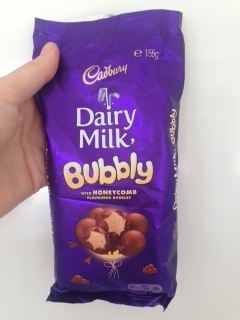 So I have some final words for you P-Plate-Princess, some pearls of wisdom from the older generation, something perhaps to enhance your life and make you a better person:

*AKA the most ethical man in the Universe.

Do you return your trolley?

*AKA the most ethical man in the Universe. 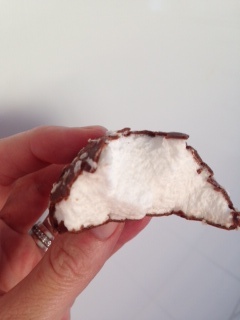 Want to know what is wrong with the world these days?

And not in the way you think.  Sure they are annoying, rude (honest?), silly, time consuming, wake-up too early on Sundays, don’t eat without messing up the whole floor, make too much noise in cafes, expensive and all that, but the real reason is that they are idiots.

Last weekend we didn’t do the normal shop online because we were away on a mini-break, so Nathan trundled down to our local Coles on Monday arvo to get the staples.  As we mostly shop online, we sometimes go a bit craycray when we get to see all the produce up close.  Our normal two hundred or so buck shop can blow out to almost three, with Grain Waves and fresh blueberries and warm bread-type products to touch and feel.

From the shops he sent me this:

Oh Sweet Baby Cheeses, you bet I do!  Snowballs??!  I haven’t had one of those babies since the great Altona Softball Club Snowball Drive of 1982.  So he got them and I dutifully doled them out to the waiting lunchboxes, rubbing my hands together at all the praise I’d be getting that night for being THE BEST MUM.  After school, I opened the lunchboxes, expecting accolades but instead finding two plump snowballs.  With nary a bite out of them.  I flew downstairs flabbergasted and fearful.  What was wrong with the kids?  Were they sick?  Dead even?  Upon questioning it was revealed that they “really didn’t like them” and “they were too sweet”.

What does that mean?

What good is a lolly if it doesn’t make your teeth tingle all the way down to the dentine?

Who are these children, where did they come from, and what is wrong with them anyway?

I checked the other compartments of the lunch boxes: Apple? Gone.  Sandwiches? Eaten.  Carrots and snow peas? Finished.  Crackers, cheese and tomatoes?  Nowhere to be seen.  Even all of the water out of the drink bottles was gone.

I have no idea what is going on here.  Are they taking the piss, throwing out all of the healthy food in an attempt to send me gently insane?  Or do they really not like the marshies?  Really?

I’m in the kitchen right now, concocting a little litmus test.  I’m baking them a slice made with the world’s second best ingredient (condensed milk) that will be so sweet their taste buds will bug-out and their feet will flutter.

Do your kids eat sweeties?

How huge am I gonna be now that this is happening?