I got a sweet message from a friend today, saying that he likes my blog, it makes him laugh and that I have ‘missed my calling’.  He’s not the only one to say such flattering and lovely things.  Sometimes there’s comments, FB and Twitter shares and words of affection, text messages.  They all fan the flames of my heart.    Mainly because it is all so unexpected.  I spend most of my time in my head, making up stories, weaving quotes that I read into narrative, laughing to myself about all of the funny people who live up there in my grey matter (it’s pretty crowded).  I guess that’s why I’m so good at mundane tasks (if I do say so myself), as I’m rarely bored, I just make some shit up to keep myself amused.

I have another great friend who told me in the early blog days that writing is ‘what you were born to do’.  I almost cried.  Partly because I respect his opinion, but mostly from the sheer relief that this secret thing that I love, might be something that others could also love.  Sure, I’ve had some lovely feedback from peeps close to me- Nath and Peter have always been my biggest supporters, but one is my Dad and the other one is probably just trying to get laid.  So they might not be completely impartial.  So coming from someone without any ulterior motives is gratifying.

So I was amused to hear that the big fella thinks I’ve missed my calling, because you see, this blog doesn’t support me in the lifestyle in which I am accustomed to.  SHOCK.  Imagine, who would’ve guessed that I’m not making millions of dollars pumping out this amazing drivel every day?  I actually have a day job.  I know, I know, how do I have time to deliver you such crafted and wondrous blog posts, sort of look after two kids, and have a career? 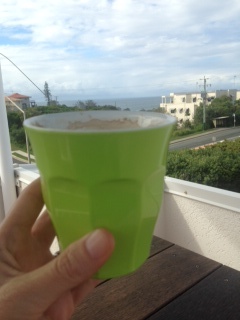 These two things: coffee and view. Making ALL things possible…

The interest was mainly because it made me think.  Have I missed my calling?  For this typing-thing that I do really does call me, in fact, if other things didn’t demand my attention with such urgency, then I would probably do it at the exclusion of all else.  And I am able do it without thinking too much.  I can be chatting, watching the telly, or even just taking a couple of seconds between patients to smash out a few paragraphs.  I won’t say it is effortless, but it isn’t too difficult, at least in this fairly raw state.  More polish would demand more attention, but, if you can tell anything about me, polish and poise are not really my area.

I read a thingy a few weeks ago that said something like, “What is the thing you do when you are procrastinating?  That is the thing you should be doing for the rest of your life.”  Unfortunately I also procrastinate by cleaning the toilet and going shopping for shoes, but still, sitting up here in my eyrie is one of the things that I would choose to do.  If there is BAS to be done, there’s a fair chance I won’t be in my office sorting through the Gratuitous Squandering of Time receipts, but rather, you’ll find me up here.  Or in the dunny.

So there you have it: some thoughts that are rattling around my head today.  How about you, have you missed your calling?  Is there something that whispers quietly in your ear in the stillness of the night, begging you to play?  Can you go and grab it, or does it scurry away in the light of dawn and bills and school lunches and urgent things?  And if you are 43, have you really missed it?   Or can you listen to the gentle beckoning at any age, and maybe, just maybe, follow it, even hold hands with it, and find out where it wants you to go?