There’s a reason why I don’t watch the news, or any stuff on television other than the footy or fluff. It’s just too hard. It makes me have too many feelings, and I might not be in control of what those feelings are. The show might go in some direction that I’m not prepared for, and I might end up with things in my head that I can’t shake.

The only things I like in my head are stories of happiness and pictures of rainbows.

Tonight I watched Four Corners, knowing that it would be flint-hard. Because sometimes I guess you have to look at the burning and blinding harshness of life. Sometimes you have to knowingly step out of the bubble. And sometimes it just gets burst for you.

That happened to my friend Penny. She has always been tough and edgy and quirky. She has an attitude that lets you know she is sharp and witty, but also that she feels all of the things. I guess it’s because she is an artist. And you know how artists are, they often seem to feel too much, but when we watch them, it’s what we adore. We love them for showing us their hearts.

Tonight I didn’t want to see Penny’s heart on the outside.

I wanted her heart to stay inside, calm and warm and peaceful, ticking along like a fluid clock, not missing any beats, not being smashed into pieces because her son had fallen prey to demons, becoming like so many young men in rural Victoria, addicted to ice. Penny and her son’s story is one of success, and it shows us that thing that we all intuitively know; unconditional love is what we need to embrace these boys, bring them back into our community, and help them to heal.

Ethan has been one of the lucky ones. he has somehow, with the love of a strong family and consistent support, come through the horror of the demon possession, and stepped into the light. His eyes are bright, and they shine with potential and sparkling, cheeky intelligence.

Unfortunately at this stage in our understanding of this drug, he is one of the few.

Just thinking of it all makes my throat tighten. I don’t know the answers. I don’t know what ‘should’ be done. I don’t even know where to begin, but I know that somehow Penny’s fierce lioness heart has helped her boy to find a path.

I hope there is enough love for the others.

Did you watch Four Corners?

What do you think we, as a community need to do? 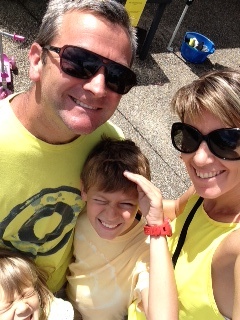 Sometimes kids can be annoying. They can be silly, they can make annoying noises, laugh at inappropriate things, get ALL of the toys out, not eat their dinner, have to be reminded to do basic, basic stuff, and, you know, just be kids. So annoying.

And other times they aren’t like that at all. They are amazing, and you get a little sideways glimpse of the adults they may become.

On Saturday Liam went to a coding workshop at the library. It’s something that he has wanted to do all year, but the course fills up quickly and he has been on a waiting list. It finally began this week. I can’t tell you how excited he was to go, and how bubbly and light he was when he came home. At ten years of age he was one of the younger kids there, yet still he put his hand up to present his coding results at the end of the course, in front of everyone. Who does that willingly? I suspect he is not of our making. He has somehow, in the ten years he has been under our care, made himself.

At times I forget to parent the kids that I have, and try to parent the kids that I think I should have. I try to stop them from reading and writing stories and playing make-believe games with sound effects and mess. I tell them to “get outside”, to kick the footy, ride a bike, run around. And of course they do do those things at times, but that is not what comes naturally to them, or at least, not always. Today is a day off and I asked them what they would like to do, open slather, anything you want. Answer: a resounding chorus of “Pajama day”. So, in trying to parent some other mythical children, I said, “How about a bike ride instead?” They both just looked at me blankly, and Coco said, “Why did you ask us what we wanted, if you were just going to make us do something else?” Fair question. And why would I want my little dudes to be anything other than who they truly are?

For those little dudes did something pretty cool on Sunday.

They planned out an event called ‘The Golden Garage Sale’. They culled their cupboards and collected bits from other people to sell. The made signs, they dressed in gold, and they sorted things into themes. (Coco is still gutted that the goods in her “Pinkatorium” didn’t sell out.). When customers were scarce, they went out onto the main road and danced around with their signs, to drum up business. Liam did some busking, and Coco jumped up and down. 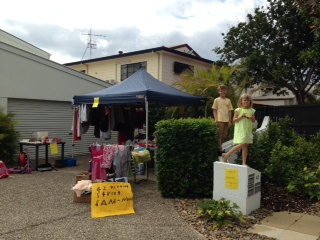 And they did all this for charity.

This was all without direction from us- Liam chose to do it and how it would go. He explained what was going on to all of the customers, and managed to get quite a few donations, as well as sales. Several times during the planning I tried to add things, change the charity, or just generally make it how I thought it should be, and he would quietly say, “It’s my garage sale, Mum.”

And he was right.

This life is theirs for the taking.

They should be allowed to play this game however they like. It’s their game. Their days are just how they should be, the most perfect way for them. Not me, not Nath, not some other kid up the road. Them. And these days are just fine.

In fact, they are golden.