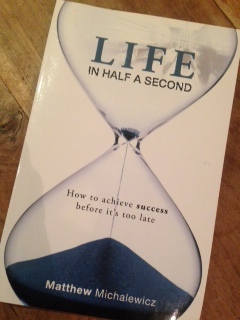 Life: You Have Half a Sec

I AM READING THE BEST BOOK IN THE WORLD.

And it might not actually be the best book in the world, but man oh man, it has gotten me fired up. I usually like to read fiction, with the occasional biography smattered in there for balance, yet over the years I have read my fair share of titles from the Personal Development and Financial sections of the bookshop. I won’t say I ever actually like these books, but I dutifully read them, because, well, you’re supposed to aren’t you? I think that’s what grown-ups do.

I went to a Problogger Seminar a few months ago, and one of the keynote speakers was a cool guy called Matthew Something-Foreign-Sounding.  I liked his presentation, in that it wasn’t so much about blogging itself, but about why we do the things we do. He talked a bit about motivation. He gave an example of asking some woman to do something she didn’t want to do, for money. And no, it wasn’t some shonky ‘Indecent Proposal’ moment, it was about seeing how much he would have to offer her to do something she was afraid of (I think the example was to jump off a tall building…or maybe eat spiders…my memory is hazy, but bear with me).  The important point was that she wouldn’t do it for ANY money. So then he said, “What if the lives of all of your family depended on it?”  And of course that was the kicker. She said she would do the scary/crazy thing.

So it seems we all have a price. We all have that something that will define what we will do, even be compelled to do, once all of the cards are laid bare.

I’ve been thinking a bit about that lately.

I have a whole bunch of things on my goal lists, to-do lists and inspiration lists. The trouble is, a lot of the things on my lists are a bit shite. I have them there because I think they should be there, not because I really care about them, at least not in the day to day running of my life. “Pay off the house” is on the list, but really, I don’t give it much thought. It will be paid off, one day, but I don’t really do much to try and speed up that process. Especially if making an extra repayment interferes with me buying a case of that Veuve that Uncle Dan’s has on sale right now for 53 bucks a bottle*. I also have other such uninspiring things as “Do BAS” and “Paint the skirting boards” on the lists.

So boring you probably stopped really reading back at my mention of Indecent Proposal, and started imagining either Demi or Paul (or both) nude.

Enter Matthew Michalewicz. At the seminar he gave us a FREE book. I nearly didn’t take one because 1. I don’t like books that look like they might include work and 2. Free book = Shit book, according to Alison’s Book Rule #476.

But I did take one, mainly because he seemed nice and mostly because I thought I might hand it on to someone. Someone who likes shitty, hard-work and probably-harder-to-read-and-most-likely-self-published-books. That someone is not me.

The book has resided on the top, then after a while in the middle, and most recently, at the bottom of my bedside-table book tower. Until last Sunday night when I decided enough was enough and the pile had to go. I was about to relegate THE BEST BOOK IN THE WORLD to the book graveyard: the drawers under my bed, where all books go to die. Or be eaten by cockroaches.

It was saved by the title, and maybe a little bit by the fact that the cover art reminded me of Days Of Our Lives, and it made me wonder what Marlana, Bo and Hope are up to after all these years. But it was mostly the title. I wondered what he was on about with all this “half a second” palaver, I mean, I’ve got forever. Haven’t I?

I was intending to save this post until I’m finished the book, and I was going to give you the good oil, the Cliff’s note of personal development books, to save you from reading the whole thing, but I’ve changed my mind. The thing is, you NEED to go and get yourself this book. And you need to read it. And you need do all of the things Matthew says to do. I’m about half-way through, and I promise you, these words have gotten me more excited about goal-setting and having a life by design than I have ever been. I’ve been to many seminars about this kind of thing, and at the crux I guess there isn’t much that is blindingly new, but the way he has put it all together…man. Just get it, and read it. You’ll see.

So here’s the book:

Best Book in the World

As Molly would say, “Do yourself a favour.”

*FACT. This is not a sponsored post (worse luck) but this is the actual price at the time of writing. Get there right now, I say. Or pay off your home-loan. Both work.

**Oh, and Matthew didn’t sponsor me either, but you never know, maybe he’ll offer me some of that money-to-do-a-scary-thing. As long as it doesn’t involve being near birds. Alive birds I mean. Dead are fine.