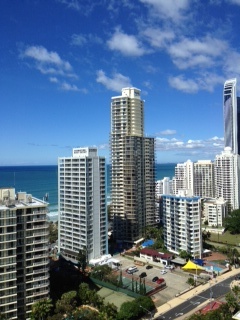 Problogger Conference for Not a Problogger

If you follow many Aussie blogs you’ll probably already know there was a Problogger conference this weekend on the Gold Coast.

Surfers: The view from The QT

There are people more experienced and more savvy than me who can tell you how it all went down, and I don’t suppose you’d be all that interested in what I learned over the weekend anyway, but I do want to tell you two things, both consisting of equal and opposite energy for me, just like Newton told us it would be.

Firstly, at the end of Day One I was completely bereft.

I thought this was the most soul-destroying seminar I’d ever been to.

Problogger is, as I’m sure you’ll have figured out, about monetising your blog.  Being paid to blog.  I’ve been blogging for just over a year, and I had an idea that being paid to do this might be something I could do.  But as the day wore on, it became patently obvious that I don’t have a clue what I’m doing here, with respect to earning buck$ for blogging.  I don’t have a niche, a specific tone, or a message.  I don’t provide anything useful, nor do I solve any of your problems.  I don’t have products or ideas to sell you. I’m a personal blogger, and that means this space is all about me.  Not really the kind of thing that lends itself to paid content or advertising.  Two other things also became obvious: I have no clue what all the techy stuff is about (SEO, what?) and being a paid blogger appears to involve a shit-load of work.  So two things I do.not.like appear to be important.

So I almost ditched the whole remainder of the seminar to quaff Cosmopolitans by the pool.

Some would say this is a pattern of mine, but I’d tell them to shut up and mind their own.

Luckily, I was there with a mate who knows me better than I know myself most times, and she pretty much forbade me to miss a single Saturday session.  Which was a good thing, for redemption was just around the corner, in the guise of Matthew Michalewicz, heralding the second big thing I needed to know.

He reminded me of many things that I needed a nudge with, and most of all, the concept that when we say we can’t do something, what we really mean, is that the motivation isn’t great enough.  Yet.  I may have said I could not learn all the computery things required to run this blog properly, but as Matthew would say; if my whole family would die if I didn’t figure it out, I probably could.  And fast.

And of course, as always, a concept that applies to you in one area of your life, will cross over into others.  This “I can’t” mantra doesn’t only apply to my bloggy life, but to my work, my family, my finances.  I can.  I just need compelling leverage.  Which also involves going back to the original idea, the thing I’m saying I can’t do, and double check that it is something that I really want, and that it isn’t just some notion that I’ve grabbed from the air, or from someone else’s bag of tricks.  The difference between something I should do and something I want to do.

Sometimes it’s good to get a whack of perspective when I’m being a big whining baby.

And a free book. 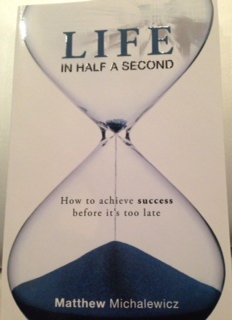 Is there anything you’ve been saying you can’t do (that you claim you want to do)?

What do you do or say to yourself to get your mojo back?