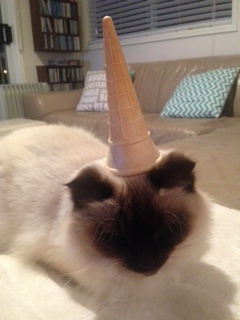 Smaggle and a Silly Thing

On the way to school, the Evil Geniuses One and Two play a game where one tries to make the other laugh.  The other is supposed to remain stony-faced, and often arguments ensue over whether there was a change in expression.  Usually once one of them finds a mirth trigger, they just do it over and over (and over) again until the other one nearly pisses their pants.

Today Liam found a trip wire.  He made up a song that went a little like this:

I’m a magical unicorn, Flying through the sky, Pooping out rainbows, And shooting butterflies.

Which Coco found hilarious.  Of course.  Poo and shooting.  What’s not to love?

And that got me thinking about something I saw a little while ago on Smaggle‘s website.  Smaggle has a Kickstarter campaign going, where she is doing ‘Silly things for a bus’.  We pledge some money, and she will film herself doing something silly, in order to raise money for a bus for the special development school she works at.  So I told the kids about a few of the things she is willing to do, chiefly: to go into an ice-cream shop buy an ice-cream, ask them if they believe in unicorns and before they answer, smoosh the cone on her forehead, and gallop out of the shop.

The kids thought this was so entertaining they laughed the rest of the way to school.  I’m not telling if anyone suffered hilarity incontinence, but I will reveal that Coco did say, “Stop it Mummy, a piece of wee is coming out.”

As they were getting out of the car they asked if they could buy that unicorn-silly-thing with their pocket money.

My heart almost busted out of me, with pride.  And then I remembered they spent all their money on Pokemon cards last week.  So guess who is now buying a silly unicone ice-cream stunt?

Turns out they may not be so evil after all.  Seems they are geniuses though.

Check out Smaggle’s thingy  HERE.  Maybe you’d like to make her do a silly thing for a bus too.

Random Unicat is not happy. No money raised.