Anatomy of a Transfusion 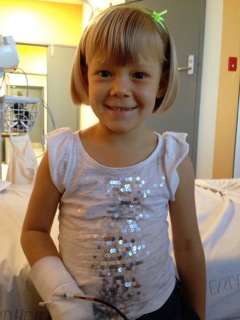 By the time you read this it will all be over, and my girl, will be tucked up tight in bed, dreaming of who knows what.  She usually stirs quite a bit, this night.  If sleep is the subconscious downloading, then I guess she has loads to down.

When she was a bub, we would have fractious nights in the lead up to a transfusion, but the night after was always the worst for me.  Leaving the hospital that night was always wonderful.  I’d sink into the seat of the car, Coco all bundled into her capsule, and I’d just sit.  I would bask.  In the relief and the relief and the relief.  There was no other time in my month-or-so quite like it.  In that car, at that moment, we were as far away from the next transfusion as we could possibly be.  Every second from then on moved us closer to the next one.  So I would bask.  I would waste some of those precious moments, allowing the soothing to trickle over me, knowing that the night ahead would be long and strange.  That she would wake and cry and stir and wake.  She would need feed on top of feed to try and rehydrate after the mid-transfusion diuretic.  Nappies soaking.  Mind churning.

Things are easier now of course.  We have grown used to the process, and the procedures.  She told me today that if she looks at the cannula before it goes in she feels “all funny in her tummy” and that even though she can’t feel the blood actually going in, it hurts if we move the tubing too much.  These are things I haven’t known before.  So perhaps it will get easier still.

She has a good memory, my girl.  She recalls all the parts of these two days.

On the second day we receive the blood.  We present to the hospital and we wait until hand-over is done and rounds are completed and then, at last, it is our turn.  She is on edge until then, my girl.  She knows what is coming, and that no amount of playing in the little park, or watching the fish in their tank will blunt that feeling of foreboding, or the feeling of that needle piecing the plump baby flesh, just near her dimpled knuckles.

She remembers well, my girl, so she tells the doctor that her right hand is the best one for puncture.  “This vein, right here”,  she says, tracing the blue feint on the dorsum of her hand.  They hear but don’t listen, so the left hand is tried first.  Then back to the right.  Usually she starts crying at a reasonable volume, well before they take the first stab.  I lie on top of her, and hold her arm firm at the shoulder, to make sure she doesn’t move, but she never does.  Even as an infant, when they wanted to wrap her up like a cat in case of writhing, she never did.  I know without looking when the needle goes in, and then, when they blow that first vein, as her screams spike and spike.  He eyes widen, as big as the moon, as if she is surprised, still, at how it feels.

This day, it was different.

Earlier on, the music therapist had spent some time with us, singing to Coco, playing and showing her instruments.  Calming her.  She asked Coco’s favourite song, and I said: The Lion Sleeps Tonight, regretting it instantly, as the therapist played that stupid song over and over, those wimmewehs scratching on the blackboard of my jangled nerves.  But it soothed my girl.  She snuggled into my arms, and as that beautiful hippy played and played, and it was true that music is a salve for the soul.

When we went into the treatment room we played the wimmewehs on the iPod, and as that first vein was blown, she cried, but perhaps not as much as she used to.  Calmer or not, there’s only so much sleeping one lion can do, so we changed to Green Spandex.  The funeral song, from the when that feels like yesterday.  We stared into each other’s eyes, my girl and I.  I think she was expecting me to cry, and I know I was expecting her to, both for different reasons.   Blue eyes locking onto brown.  We couldn’t be more different sometimes, my girl and I, but we held our eyes, and we held our strength.  I’m sure we both felt like weeping, for some reasons different, and some the same, but we didn’t.  We breathed deeply and we held each other and we waited for the pain to pass.  It hurt.  But we got through another little bit.

Sometimes we couldn’t be more alike, my girl and I. 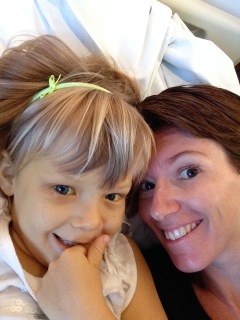 If you have already donated blood in the last 3 months, Thank you, From The Ashers.