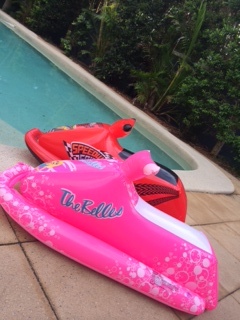 The Apple Doesn’t Fall Far From The Tree

This week the Evil Geniuses have been playing in the pool a lot, so, as it is as the beginning of every Summer, we spend a good half an hour in head-spinning oxygen deprivation, inflating the pool toys from last year, and finding out which ones have slow leaks (which, of course, as is aligned with the laws of nature, is all of them).

So we traipsed off to the shops to make our annual plastic purchases.

This year they wanted donut-shaped rings ($5: tick) and “something else”. The something else was ill-defined. They didn’t quite know what they wanted, but they knew they would know it when they saw it. It turned out that the elusive something was tiny inflatable jet-skis manufactured for 3 years and up. (Replete with graphics befitting 3 year olds of faux Cars and Barbie: that’s what you get for 5 dollars it seems.)

No amount of explaining that these toys were too small for a 10 and 7 year old, that they would probably at best sink, and at worst pop on impact, were wasted on the Evil Geniuses. They had made up their tiny minds. And they had their own money.

So we came home with our cache of age-inappropriate floatation devices.

As soon as they helped us pump them up (by blissfully swimming in the pool, whilst we sat on the edge, sweltering in the midday sun, and almost fainting with carbon dioxide poisoning) they were away. They jumped onto those teensy jet-ski replicas and were off. Literally. They couldn’t stay on them for more than a second or two. And once the plastic grew slick with water, the chances of successful circumnavigation of the pool were significantly reduced.

Liam was quick to blame the faulty side floats and the lack of appropriately scaled handlebars for gripping. (He doesn’t like to be wrong, my boy. I’m thinking Apple, Tree)  Coco just said, “We’re too big for them Liam. They’re made for three year olds.”

No shit. It’s not as though anyone had said that IN THE SHOPS. BEFORE they were paid for.

Both of the Geniuses agreed that they “couldn’t do it.” And that they should give the toys to smaller children they know. I suggested that perhaps they could think of another way to use the toys, mainly because I was still light-headed from the lack of oxygen, but also because I hate to see five bucks wasted. They agreed that would be a good idea, and proceeded to try other methods of staying on.

After all of about five minutes of continued falling off, Liam said, “Well, that’s it. I can’t do it.”

I asked him how he could give up so easily, considering how much he had wanted those toys only moments before. He said, “It’s like this Mum: I find if I’m going to be good at something, I can usually do it on the first try, or pretty soon after. If I can’t do it almost immediately, then I’m never going to be able to do it.”

I conceded that he was probably right. He looked at me in disbelief. This wasn’t the usual party-line here at The Asher’s where learning and failing and repetition and then success, were valued. I said to him that if he had that belief, then that was exactly how things would come to pass. If he didn’t think he could, then he never would. If however, he wanted something badly enough, and with enough joyful passion, then he would probably find a way. We stared at each other for a long and loaded moment, and he said, “Oh no, it’s like Coco mastering the monkey-bars isn’t it? She took the whole year and had blisters all over her hands and bruises on her shins, but she did it eventually.”  I told him that that was exactly what it was like. Keeping focussed on a goal, and never giving up.

We were silent for a moment, lost in the reverie of all of the times we didn’t perservere. Of all the times we gave up too early.

We looked around the pool, to see Coco, feet wedged securely into what Liam was calling the ‘lateral stabilisers’ of the mini jet-ski, floating silently around, collecting the red berries that had been blown in by the nor-wester’. Immune to all of the doubts and insecurities and negative self-talk. Immune to everything really, other than the task at hand.

We looked at each other, my little apple and I, smiling at that weird little yellow kid in the pool, completely oblivious to all of the things she teaches us, and we said at the same time: “Tenacity.”

She really is a different kind of fruit.

Have you purchased your yearly stock of pool-toys, with their excellent repair “stickers” yet?