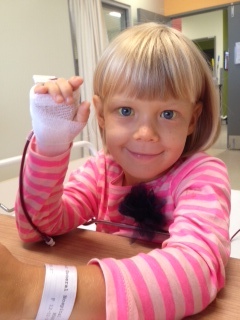 Kid with a thing

You might already know, but we have a kid with a thing.  The thing is rare and has a long name, so Nurses write it on the backs of their hands, in order to google it later.  Doctors nod intelligently and memorise it, in order to google it later.  The thing is called Pyruvate Kinase Deficiency, and even I sometimes worry I’ve spelt it wrong.  Even though I have been well acquainted with PKD for seven years now.

This rare thing can mean nothing very much at all, and some people don’t even know they have it until they get a bit stressed, run a bit of a fever and get a bit anaemic, and it is found out, almost incidentally.  This rare thing can also mean a whole lot of drama, with operations and gall stones and blood transfusions and a compromised immune system.

We found out about this very rare thing, that was hanging out on Chromosome Number Two, when Coco was just two months old.  She had turned a vibrant shade of yellow a few hours after her birth, which calmed down with copious breast milk and UV lights.  At two months of age, the yellow came back, but this time it didn’t feel quite so jaunty.  This time it felt vile.  Or violent.  Either way, the secret part of my brain that knows things, knew it wasn’t good and started to thump.  In fact, that secret part had been whispering, “she isn’t quite right, you know” all along, but I had dug a nice little hole and buried that thought snug and safe for two whole months.  Until it came clawing to the surface like something out of Pet Semetary.

I was told that Coco has a “severe form of PKD, that we think, at this stage, is compatible with life.  She will require monthly transfusions and surgery as soon as she is strong enough”.  I buried that thought in the hole where the other one had been, and this time I stamped it right down with my boots.  Just to be sure.  I didn’t tell anyone the whole story.  Just the PKD bit, which of course, is the easy bit.  As time wore on, I let little bits of the story creep up to the surface where I could have a peep at them, one piece at a time.  I would talk to Nath, or Hayls about the bits, and then I would pack them carefully back down again.

This is Coco’s seventh year of living with PKD, and so far she has surpassed all expectations.  The only operation has been to repair the tooth enamel that her bilirubin destroys, and so far (fingers and toes and eyes and legs and arms crossed) she still has her spleen and her gall bladder, and only gets blood every three to four months.  Which is a surprise better than anything that comes in one of those special little aqua boxes.  I am now told, “She still has a severe form, and will be transfusion dependent for life, but she is coping better than anticipated.  Can we take her spleen out now please?”   I just smile and say, “Maybe soon”.  And then I get out the ol’ shovel again.  Burying, burying.

This week she is getting close to needing blood.  Already there have been tears over things small and slight, and then there have been hardly any tears over bruises large.  She is more needy of me, and wants me close, and I can hear her cough at night.  This cough will last until the day-after transfusion day, perhaps.  When I’m trying to do a neat plait in the mornings her head wobbles like one of those dashboard dogs, and we need to stop several times on the way back to the car after school for legs and heart muscles that need rest.

People at the shops will stare when they think I’m not looking, at her pale jaundice, and someone might ask, “What’s wrong with her?”  There will be tantrums over unsuitably cut up toast, or not enough carrot.  There will be challenges in getting homework done, and whinging over getting dressed.  Or undressed.  Or, anything.  I will say, “I think you’re a bit tired,” and she will scream back that she isn’t.  For tired is a sign that hospital is close.

I will have to remind myself to go easy, to relax, if we are a bit late for school or swimming, to let her know that if she feels fractious she needs to voice that in a reasonable way, rather than lash out at those who love her most.  I will have to bend a little, and she will have to flex a little, and we will get through these next two weeks or so with our hearts and tempers intact.

The countdown is on.