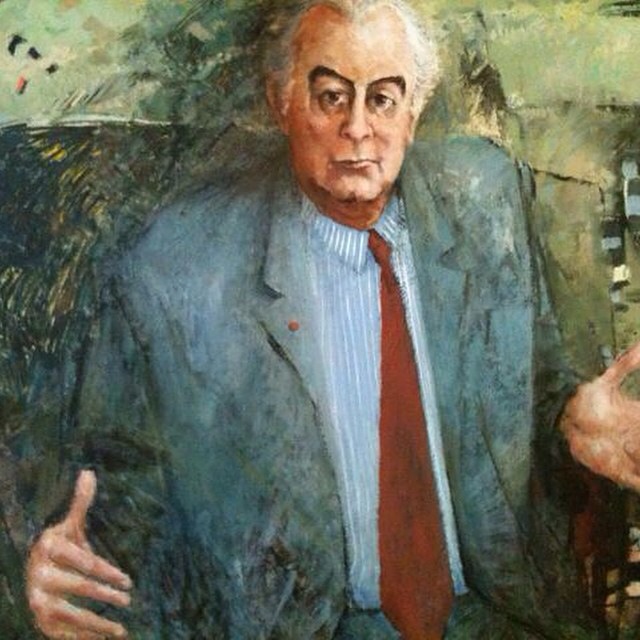 Gough wouldn’t sit for his traditional portrait following the dismissal. This is the Archibald portrait by Pugh that he insisted be used

I was one year old, when, to the catchy tune of, “It’s time” Gough Whitlam came to rule over Australia. And rule he did. In a flurry of chaotic activity he did so many things to change the landscape and the philosophy of the suburbs I would grow up in.

By the time I was three years old, University education was free, divorce was ‘no fault’ and women were finally being heard.

Heady things for a girl-child growing up in the Western suburbs of Melbourne.

Macabre as I am, I like to reflect on my life from time to time, and consider what my eulogy will be like. Who will speak for me? What will they say? What will be my legacy?

Yesterday, on hearing the news of Gough’s passing, I sat still for a time, wondering at the legacy of that silver-haired silver-tail. In his short time in power he achieved so many things that have enriched my life, in ways I never even really stop to consider. As I sat in my minutes of silence yesterday, I shed a tear for a man I never met, who quite frankly, has allowed me to have the life I am so lucky and grateful to have.

Most importantly, I grew up with family harmony and cohesion due to his divorce reforms and the provision of legal aid. Then, by extension I was able to see my Mum find her soul mate and true love, instead of being bound by archaic laws that would have trapped her in a stale, repressive relationship with my biological father. Such important imprinting for a pre-school girl.

I also grew up not wondering if I would go to university, but what would I do when I got there. I am at the first of my family to go to uni, grabbing those florid, precious pieces of paper that allow me to work and play in a career that makes my heart sing, and (hopefully) enhances the lives, and expands the potential of the beautiful people in my community. I would never be a chiropractor without Gough’s impact.

The year I started Uni HECs was being introduced and we campaigned and rallied against it, sitting in, and shouting out. For many of my uni mates from private schools and prosperous families, the demonstrations were a bit of a lark I suppose, a chance to shout a little and have a grown up tantrum, but I was shouting from my core.

Growing up in the West, university education was still seen as privilege and a gift, and I was terrified that Bob Hawke was more concerned with The Australia Card and Expo and crying on telly over being caught womanising, than taking care of tertiary education. For the first time in my life I realised that studying within the sandstone walls of Melbourne University was not a right, like I had grown up thinking.

Rather, it was a present to the future, from a politician who swept in like a tornado and shifted the soil and planted the seeds of a new Australia. The suburban Australia of my happy, healthy, golden childhood.

He really did change my world, and define us as The Lucky Country.

Thank you for the life I have been able to live.