It’s been a big week, in that I have spent a fair amount of it procrastinating, so let us hope that is over now.  The whining has been substantial… So you can all stop now okay?  The talk is written.  We also had a really cold day here.  So that was a bit shit.  But we are back to blue skies and a crisp blue horizon again today.  Whew.

Without further ado, here are the hits:

1.  Coco’s hair this morning.  On Thursdays I start work early, so I don’t do her hair for her.  I went into the bathroom and caught her admiring herself this morning.  I wanted to share a pic with you, but for some reason it won’t load (??!).

So let me describe it: headband put on almost diagonally, so that it looked decidedly uncomfortable, one side near the ear the other near the occiput, a “low pony” but not tight enough, so that it was half falling out, with said low pony about eight centimetres left of centre, so that all of her just-past-bob-length hair on the right had fallen out, and, to complete the look, speed humps galore.

I suspect Nathan is quite good at, um, carpenting things.

Does it count if you’re melting them in your mouth?

I purchased them accidentally this week (I meant to get the dark choc version), and we all know that is it illegal to let something as sweet and innocent as this go to waste.  So I’m eating them. All.  They are going down very easily, even if my throat does have a sugar burn right now.  I Quit Sugar?  It seems the answer is no.  I blame Cadbury- the packaging is very similar to the ones I wanted…  Touche chocolate manufacturer and marketing team, touché.  (Yes, yes, I know Cadbury is bad chocolate. I know I should be eating cacao nibs or something, but I just can’t resist that velveteen purple sheen.)

3.  I’ve mentioned to you before how much I love the internets, and the kind people you come across on here, yes?

Well check this out:  Last week I read  this article in Kidspot by Lana Hirschowitz regarding a robotic toy called Sphero.  As “I know” Lana via Twitter, I sent her a message asking her if she had a Sphero, and if she thought it was as good as the excellent advertising campaign suggests.  Turns out she had a Sphero her kid didn’t want, and offered to send it to me for the Evil Geniuses.

I said I would buy it from her, and at least pay the postage, but she was having none of it.  Don’t you just think that’s amazing?  Lana doesn’t know me, or the brats, and yet, she went out of her way to go to the post office, pay to send it, etcetera, etcetera.  The kindness of strangers.

Here are the geniuses receiving it on Jammie Day: 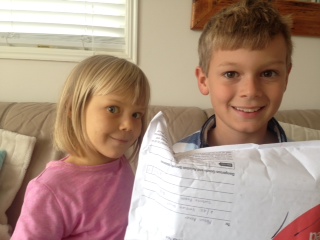 Look at them: Liam is chuffed and is IN NO WAY sharing that thing with Coco, who is more interested in posing for the ‘receiving a package’ shot.

And here is Sphero.  His name is Charles. 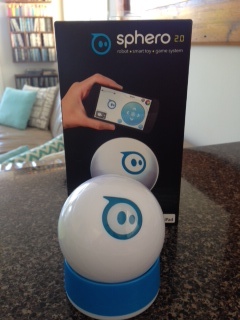 Charles. The Sphero. He is a ball. Bloody hell, now I’m even personifying him.

4.  Now, I may have mentioned a thousand times that I am giving a speech at a seminar this Saturday, so I required an outfit befitting my professionalism and maturity.  So of course, last Sunday I was to be found at Country Road, Maroochydore.  I’ve gotta tell you: OH MY GOD.  I had the most amazing, personalised, funny, attentive service in the known world.  I can’t remember if I’ve told you about the chicks in our local CR before, so if I have please skip ahead, for I shall be rhapsodising.

When you get to my age you can sometimes become a little invisible in shops.  Youngies don’t want to serve you, and real Oldies are more interested in straightening shelves.  Not this lot.  It was like I had a personal shopping team.  They were bringing me in things to try, gushing and complementing, and then bringing more.  They were placing jackets and scarves on me as though they were the Queen’s robes, then scuttling off to find more accoutrements.

They even gave advice on appropriate undergarments (of which I share with you next week, but for now I have one word: contraceptive), as we shared anecdotes of The Menopause and the best skincare required to combat the dreaded desert derriere.

Needless to say, I exited with the Motherlode of white bags.  Well played CR, well played.

As I type this he is applying the heat gun (Who knew there was such a thing? I was using a travel-sized hairdryer) to some particularly ugly photo frames to remove 130 small mirror tiles that I NEED for my talk on the weekend.  You see, I decided yesterday that I simply must have mirrors.  One hundred and thirty of them.  And no shop in Noosa had any more than eight.

And then I found these, googled “removing mirrors” and found that it would be a cinch.  It isn’t.  And yet, HOTY is doing it.  At 10pm.  Nathan, the chiropractic profession is lucky to have you.  (Especially as I left it so late that I missed the  Audio Visual cutoff time for the presentation, and I do need some kind of gimmick….)

So there you have it, the HITS as I see them.  Wish me luck on Saturday, I’ll be the one vomiting with nerves in the dunnies at 3pm and trying to do a panic wee whilst wearing Spanx (Doh!  I gave the underwear post away).

What are your hits?  C’mon, gimme one at least.