So what happened next?  This: 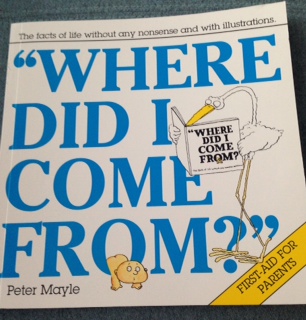 The easy way out

I made them sit on the couch and read it together.  They managed to read it all without carrying on too much, even the creepy bits.

I sat next to them in case of hyperventilation or freak outs.  Nath busied himself with lots of throat clearing and footy cheering.  I told him to “shut up, this is important.”  He was silent after that, possibly in case he would be recruited to say the word vagina or something.

At the end of the book I said, “Any questions, comments or concerns?”   And there were none.  So there you have it, birds and the bees sorted.

I had another two volumes ready: What’s Happening To Me?  (A pink one for the ladies and a blue one for the gents, FFS)

Liam read it as his bedtime story, and in the morning he said it was “Not bad, but there was nothing about pimples.  I wanted to read about pimples, and maybe see some pimples, I can’t wait until I get pimples.”  So it seems like the apple doesn’t fall far from the tree.

Coco read a chapter and pronounced it “Bore-ring” and went back to Go Girl.  So apparently it’s more interesting to read about a kid getting hit in the face by a netball.

Have you had “the talk” yet?