I Got It Going On 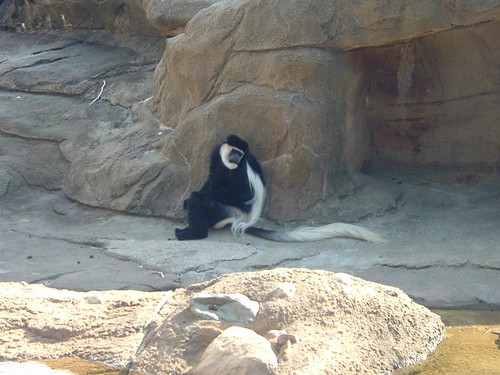 The Colobus Monkey looks perturbed about his tail too….

Ever had one of those days when you know you’ve just got it all going on?  I have.  I walk around the place mentally high-fiving myself because: I got it going on.

Like today, when I’d done all the menial tasks of changing sheets, loads of washing by two, dinner in the slow cooker (DO YOU HAVE A CROCKPOT YET?  IF NOT STOP READING THIS AND GET YOUR ARSE TO BIGW OR SOME OTHER CHEAP SHOP AND GET ONE RIGHT NOW.  GO ON, I’LL WAIT RIGHT HERE), notes and forms for the week filled out, including the stuff for school camp meticulously named* and shoved in the bag… etc.   All that, but wait, there’s more, I also went to assembly EVEN THOUGH MY KID WASN’T GETTING AN AWARD!

I love days like this.  I can walk around being quietly smug, because: I got it going on.  In fact, I had it going on so hard that I had time to have a massage and still get to the school pick-up twenty five minutes early.  Just enough time to have a scroll through Facey/Twit/Insta before I waltzed down to pick up the cherubs.

Days like this I got it going on so well that I was able to swan about the shops for a bit, waving hello to all the people I know in my town.  In fact, I was probably humming People In Your Neighbourhood from Seasame Street as I went, a glide in my gait, with a light breeze tickling my arms that perfectly balanced the cosy Autumn sunshine that was giving me a little glow.

If I had to imagine what I looked like right then, I’d guess people would think I looked like Mother of the Year, who could possibly have been a Target model if I hadn’t been in such a good paddock since the nuptials.  Either that or they would’ve thought the carpenter had been home at lunchtime to, ahem, screw some wood in place.

As I said, I got it going on, so I thought I’d pop in and have a quick wee, check my hair and lippy before going down to the classrooms.  I was early remember.

And there I saw it.

Well, saw them, because there were two things, weren’t  there?

I racked my brain, trying to remember when I last went to the dunny, this is important, because: I had a whole lotta toilette tickets coming out of my knickers like some kind of Colobus Monkey tail.  You know what I’m talking about right?  We’ve all seen it.  The lady in a rush who pulls up her Reg Grundies too fast and leaves the evidence out on show.  That.  All I could  think was, “I’m glad I didn’t do a poo, I’m glad I didn’t do a poo.”

And then the other thing.

The biggest, reddest, plumpest, pus-filled pimple that ever a menopausal women did have.  It was practically flashing and pulsating like the disco lights at Blazers in 1992.  No wonder people were looking.  It was like a flare going off.  No wonder they thought I modelled for Target.  There was a bullseye logo.

So yeah, in case you were wondering: I got it going on.

*Scribbled with a permanent marker, that has bled through the fabric so everyone can see the kid is in fact called MAIL.

How was your post Mother’s Day comedown?  Did you have a Prosecco Pimple too?